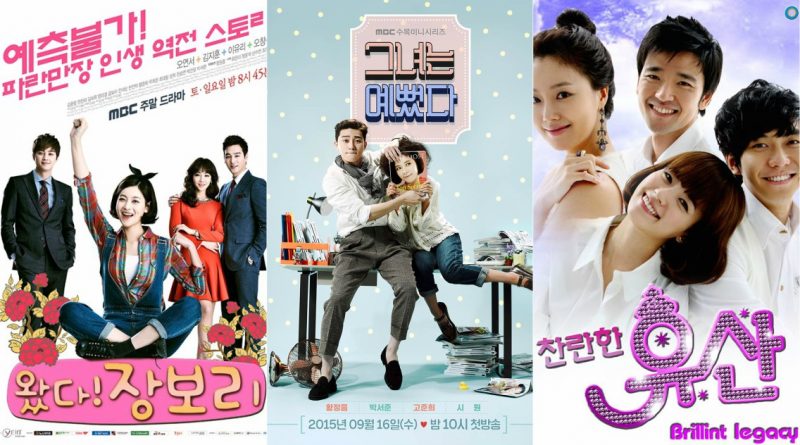 Korean drama is very loved by people not only within the country itself but also other countries in Asia. Korean culture wave is very popular especially in its neighbor country, China. The popularity of Korean dramas in the country makes Chinese cinema industry interested to recreate the drama by adapting to their own culture. Here are 3 Korean dramas remake by China.

1. Come! Jang Bo Ri –> Because of Meeting You/Because of You

‘Come! Jang Bo Ri ‘is a drama that aired on MBC in 2014 with a total of 52 episodes. The drama focuses on a well-known family of experts in making Korean traditional clothing Hanbok. The drama is played by Oh Yeon Seo, Kim Ji Hoon, Lee Yu Ri, Oh Chang Seok, and so forth. The drama was much loved in Korea, even earning the Drama of the Year award at the MBC Drama Awards. The drama is then remade by China with the title ‘Because of Meeting You’ which aired on Hunan TV on March 2nd to April 4th, 2017 with a total of 56 episodes. In the Chinese version of the drama, the theme of traditional Korean clothing is transformed into embroidery techniques in traditional Chinese clothes. The drama is played by Sun Yi, Deng Lun, Wu You, Dai Chou and others.

‘She Was Pretty’ is a drama that aired on MBC on September 16th until November 11th, 2015 with a total of 16 episodes. The drama is played by Park Seo Joon, Hwang Jung Eum, Goo Joon Hee, Si Won, and so forth. This drama tells of a woman named Hye Jin (Hwang Jung Eum) who as a child is very beautiful but turned into ugly as an adult. As a child she befriended Sung Joon (Park Seo Joon), her fat and ugly neighbor. The two then meet as adults with an appearance that is much different from their appearance as a child. The drama was remade by China on LeTV on 2 January to 2 February 2017 for a total of 40 episodes. The Chinese version of the drama is called ‘Pretty Li Hui Zhen’ starring Dilmurat Dilraba, Sheng Peter, Li Sierra, Zhang Vin.

Drama ‘Brilliant Legacy’ is a drama that aired on SBS on April 25th until July 26th, 2009 with a total of 28 episodes. The drama starring Han Hyo Joo, Lee Seung Gi, Bae Soo Bin, Moon Chae Won and others. The drama is about Go Eun Sung (Han Hyo Joo) who lost her mother when she was 11 years old. Tragedy returns to Eun Sung when her father dies. But then she was told that she would inherit the wealth of a grandmother named Jang Suk Ja. Jang Suk Ja is the grandmother of Sun Woo Han (Lee Seung Gi), a handsome and arrogant young man who does not know how much money is worth because he was raised by a wealthy family. The drama was remade by China with the title ‘My Splendid Life’ which aired on Dragon TV in 2011 for a total of 38 episodes. The Chinese version of the drama is played by Jerry Yan, Chen Yedda, He Bin, Yung Yvonne, and so on.