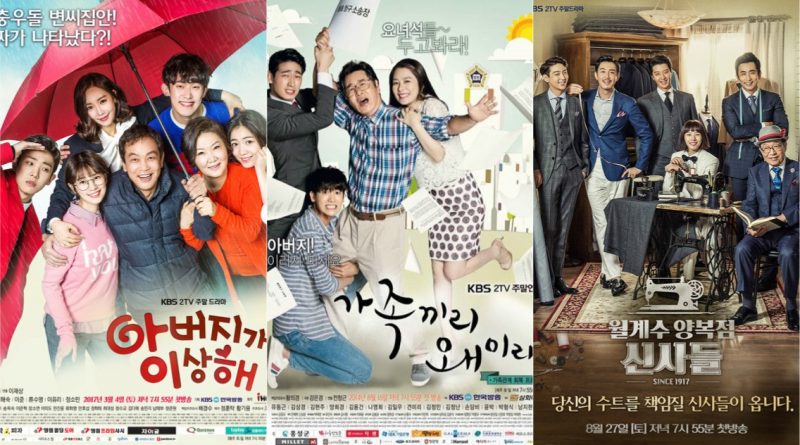 Rank&Talk
November 14, 2017November 15, 2017 Ria All About My Mom, My Daughter, My Father is Strange, RANK AND TALK, Seoyoung, What Happens to My Family

1. The Gentlemen of Wolgyesu Tailor Shop

The drama ‘The Gentlemen of Wolgyesu Tailor Shop’ is a KBS weekend drama that airs in 2016 from August 27, 2016 to February 26, 2017. The drama stars Lee Dong Gun, Jo Yoon Hee, Shin Goo, Cha In Pyo, and others etc. The drama is also the latest work of senior actress Kim Young Ae, who died shortly after her last episode aired. This drama tells about the journey of Wolgyesu coat-making shop and the people associated with the store. The drama is a family drama filled with romance and friendship themes. Lee Dong Gun and Jo Yoon Hee met through this drama as the main character and finally decided to get married in the real world. The ‘Gentlemen of Wolgyesu Tailor Shop’ drama ended in 54 episodes with a rating of 35.6% and earned the highest rating of 36.2%.

2. My Father is Strange

The drama ‘My Father is Strange’ is KBS’s weekend drama that airs in 2017 from March 4 to August 27 with a total of 52 episodes. The drama stars Kim Yeong Cheol, Kim Hae Sook, Ryu Soo Young, Lee Yu Ri, Lee Joon, Jung So Min, and so on. The drama ‘My Father is Strange’ tells of a family consisting of father, mother, one boy and three girls living in Seoul. But one day comes a man who is an idol artist and claims to be the son of the father in the family. The drama started its first episode with a rating of 22.7% and managed to maintain its position in the 1st rank until the last episode which achieved a rating of 33.3%. The highest rating ever achieved by this drama is 36.3% ie on the 50th episode.

The drama ‘All About My Mom’ is KBS’s weekend aired from 2015 from August 15, 2015 to February 14, 2016. It starred Eugene, Lee Sang Woo, Go Doo Shim, Kim Mi Sook, and so on. The drama ‘All About My Mom’ tells the story of Jin Ae (Eugene) who works very hard to earn money but ultimately the money runs out for the family, coupled with his mother who just said to his eldest son only. Jin Ae then meets up with Kang Hoon Jae (Lee Sang Woo), who happens to be the son of her boss. The drama consists of 54 episodes with the highest rating of 39% earned on the final episode.

4. What Happens to My Family?

The drama ‘What Happens to My Family’ is KBS’s weekend drama which aired from August 16, 2014 to February 15, 2015. The drama starred Yoo Dong Geun, Kim Hyun Joo, Kim Sang Kyung, Yoon Park, Park Hyung Sik, and others etc. The drama tells the story of Cha Soon Bong (Yoo Dong Geun), a widower with three children, he is very fond of his children even though they are very selfish and disrespectful towards him. One day, he learns that he has cancer and intends to spend the rest of his life ensuring that his three children remain happy even though he is gone. The drama ended in episode 53 and managed to achieve a high rating of 44.1% on episode 51. Drama ‘What Happens to My Family?’ Also won the best drama award in the ’22nd Korea Culture and Entertainment Awards’.

The drama ‘Seoyeoung, My Daughter’ is KBS’s weekend drama that aired in 2012 from September 15, 2012 to March 3, 2013 for a total of 50 episodes. The drama starred Korean actresses and actors such as Lee Bo Young, Lee Sang Yoon, Chun Ho Jin, Park Hae Jin, Park Jung Ah, and so on. The drama is a family drama focusing his story on the life of Seo Young (Lee Bo Young) who has not had a good relationship with his father but then reunited thanks to the help of his twin brother Lee Sang Woo (Park Hae Jin). In this drama, Lee Bo Young competed acting with Lee Sang Yoon. Lee Sang Yoon plays the role of Kang Woo Jae who falls in love with Seo Young and pursues her aggressively. The drama ended with a rating of 47.7% and earned its highest rating in episode 46 with a rating of 49.3%.

March 27, 2017 Tri Comments Off on An Interview with the Casts of ‘Ordinary Person’
DRAMA KCORNER VIDEO