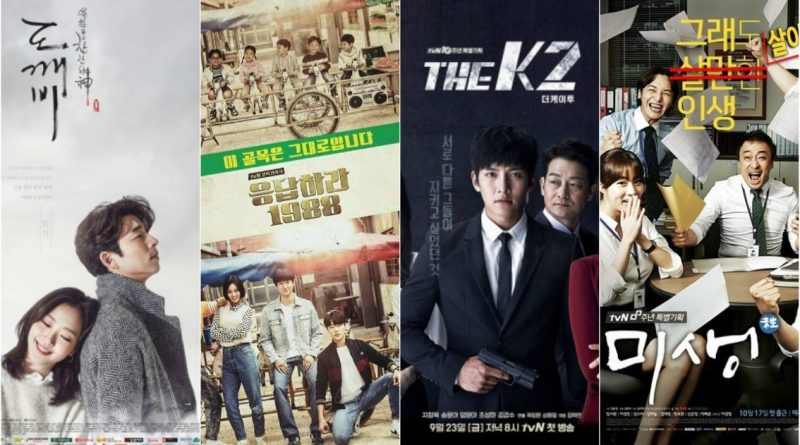 It’s no secret that the name tvN as cable tv becomes acknowledged after the drama ‘Goblin’. The drama played by Gong Yoo and Kim Go Eun successfully attracted Korean and International viewers. In addition to having a very high rating at the end of its airing, ‘Goblin’ also got a Grand Prize from Baeksang Award. A few months ago ‘Goblin’ also briefly aired in Japan thanks to its popularity.

‘Reply 1988′ can be considered as viewers’ favorite drama for all age ranging from teenagers to adults and even elderly. ‘Reply 1988’ is part of the most successful Reply Series. In the first episode, this drama has managed to record a rating of 6% more. After that, the drama won many awards ranging from Best Director to Best New Actor in Baeksang Award.

Not much different from other tvN’s year-end dramas, ‘Misaeng’ also managed to captivate the audience. ‘Misaeng’ is said to have a plot that is closely related to the life of many people. Therefore, this drama became a favorite of viewers. ‘Misaeng’ managed to get a rating of more than 10%.

‘The K2’ is a drama starring famous actors Yoona and Ji Chang Wook. This drama has attracted many viewers thanks to the strong wisdom displayed by both. Therefore, the rating is also high.

December 18, 2017 Ria Comments Off on Celebrities’ Winter Fashion at The Premier of Movie ‘The Return’
STAR VIDEO

July 7, 2017 Tirta Comments Off on K-Drama Couples That Turned Into Real Married Couples