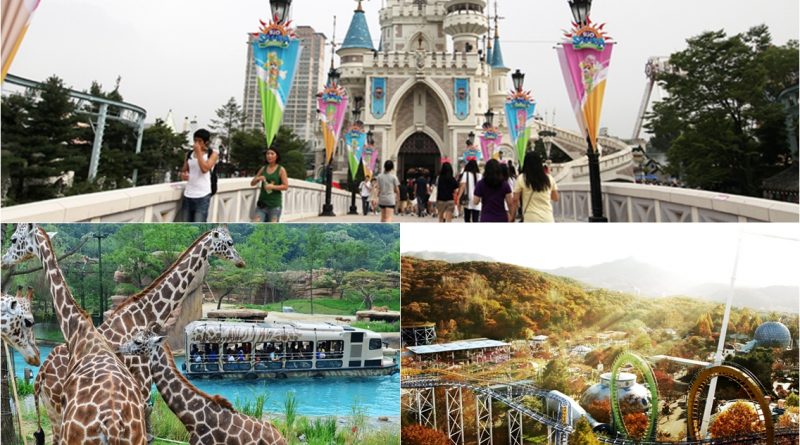 Playground or amusement park has always been a cool place to visit when you are on holidays. Here are 3 Korean Amusement Parks you need to visit.

All we know, Lotte is a mall or supermarket. But in Korea, Lotte also makes a playground called Lotte World. Lotte world is located in Olympic-ro, Songpa-gu, Seoul. Lotte world is an amusement park that offers various types of rides that boost adrenaline, ice rink, folk museum and there are also various carnivals. The location is divided into Lotte World Adventure which has districts representing various countries with various facilities and souvenir shops, indoor area with a world-themed theme and an area with Magic Island theme outdoors.

Everland is quite popular and is often used as the location of drama shoot or variety shows, such as drama ‘The Producer’ and variety ‘Running Man’. Everland theme park is located in Everland-ro, Yongin city of Gyeonggi province. Everland provides entertainment such as rides, festivals, themed areas and zootopia. The festival is presented as a tulip festival, roses festival, summer splash, Halloween festival, romantic illumination and various other festivals throughout the year. Lost valley, which opened in 2013, provides safari and touring with amphibious cars to see 150 animals from 20 species, including a pair of giant panda gifts from Chinese president Xi Jinping as a symbol of friendship with South Korea.

Do not get confused by its name, Seoulland is not in Seoul but rather in Kwacheon, Gyeonggi-do. Seoulland is the first amusement park in Korea and has a beautiful view as it is surrounded by Cheonggyesan. The “World Square” area of Seoulland offers traditional architecture and people’s goods from around the world. Seoulland has about 40 different types of rollercoaster. Seoulland has a wide selection of festivals held in each season as well as a unique laser show held in the evening.