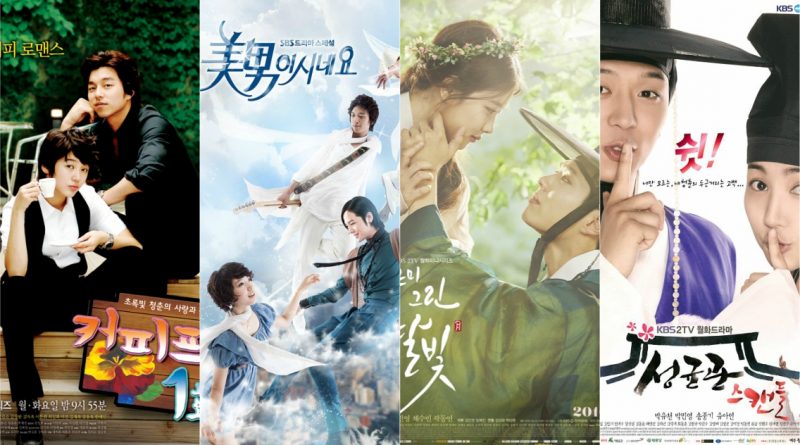 MBC drama ‘Coffee Prince’ is a drama that revolves around the love life and dreams of four young people who meet in a cafe. Hanye Gyeol (Gong Yoo) is an intelligent young man who hates a career in his life. Unwilling to join the family business, he was ordered by his grandmother to run a cafe. One day, he meets up with Ko Eun Chan (Yoo Eun Hye) who is a woman who has a difficult life, she works hard to pay off her debt and even get her feminine image. Han Gyeol’s grandmother wants him to get married soon. The grandmother arranges many dates for him. After Eun Chan meets with Han Kyul and mistakenly that he’s a boy, Han Kyul decides to hire Eun Chan to be his gay lover to avoid the grandmother’s matchmaking. Because she is in need of money Eun Chan had no choice but to accept his offer.

The SBS drama ‘You’re Beautiful’ tells about Go Mi Nyeo (Park Shin Hye) has long been living in an orphanage along with her twin brother, Go Mi Nam (Park Shin Hye) since their father died. Years later, her brother becomes a musical idol, and Mi Nyeo lives in a nun’s dormitory to achieve her dream of becoming a nun. One day, Mi Nam had to go to America to repair his failed plastic surgery. Ma Hoonyi (Mi Nam’s manager, Kim In Kwon) tries to approach Mi Nyeo to pretend as Minam for a month until her twin brother heals. At first Mi Nyeo refuses the manager’s call but eventually she agrees to help her brother gain fame and open up the opportunity to find their mother. Mi Nyeo disguised as Minam, joining the band ANJELL with Hwang Tae Kyung (Jang Geun Suk), Jeremy (Lee Hong Ki) and Kang Shin Woo (Jung Yong Hwa).

KBS drama ‘Moonlight Drawn by Clouds’ starring Crown Prince Hyomyeong (Park Bo Gum), Hong Ra On (Kim Yoo Jung), Kim Yoon Sung (Jin Young), Jo Ha Yeon (Chae Soo Bin), and others. This drama revolves around a woman named Hong Ra On who is disguised as a man with a profession as a consultant affair. Starting from a love letter written for clients, Hong Ra On then met with the crown prince of Hyomyeong. The crown prince is the first son of King Sun Jo who is handsome and smart. Hong Ra On actually did not realize that she met the son of the king, and vice versa the Crown Prince did not think that Hong Ra-On is actually a woman. The story of love set in history in this Joseon era focuses on highlighting the love story of Crown Prince Hyomyeong and Hong Ra In. This drama aims to lift the story of teenage Joseon love that has not been written in history.

KBS drama ‘Sungkyunkwan Scandal’ tells of Kim Yoon Hee (Park Min Young) disguised as a man who works in a bookstore because it is demanded by family economic circumstances, copying books for the nobles. Yoon Hee decides to take an exam that is destined for the nobles to become government employees. It is also what brings Yoon Hee to meet Lee Sun Joon (Park Yoo Chun), the son of the State Minister who leads the Noron faction. Sun Joon traps Yoon Hee to take the exam so they both get accepted into Sungkyunkwan University. Women are forbidden to enter the school, so Yoon Hee must be careful, especially when she has to deal with the student president Ha In Soo, receive a fantasy from Gu Yong Ha’s classmate, avoid a fierce Moon Jae Shin roommate, and control the growing love for Lee Sun Joon, who is also her roommate. Together, they grow and learn in the hope of building a better Joseon.

March 11, 2017 Tirta Comments Off on Sulli and Choiza End their Relationship after 2 Years and 7 Months
DRAMA VIDEO