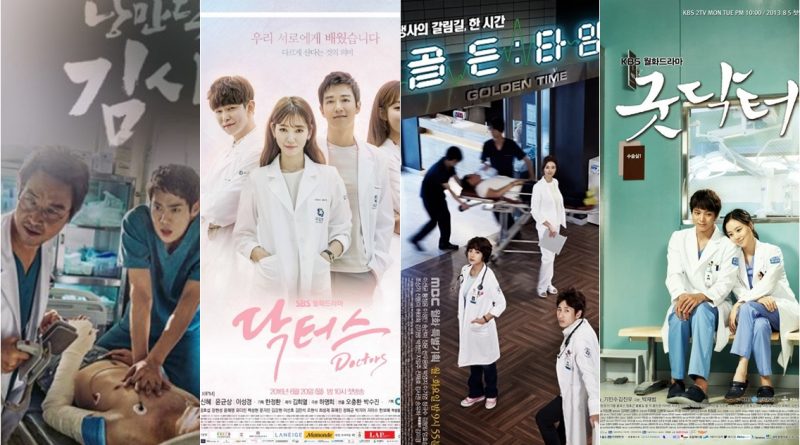 Korea always presents dramas with different themes and professions. One of them is medical-themed drama. Not only are we told about stories and conflicts in dramas, but usually dramas with medical themes also reveal life in hospitals and how doctors confront each other. It helps us understand how doctors work. Assisted with medical equipment as well as other attributes such as blood and surgery, these medical theme dramas get the attention of viewers.

Romantic Doctor, Teacher Kim is the drama aired on SBS television channel played by Han Suk Kyu, Yoo Yeon Seok and Seo Hyun Jin in 2016. The 20-episode medical drama tells the story of Boo Yong Joo (Han Suk Kyu), a genius surgeon. Previously he was the most famous person in his field for his skills, and even worked at a reputable hospital in Seoul, Geodae. After a traumatic incident, he disappears and changes his name to Kim Sa Bu and works in a small hospital called Dolddam. There, he teaches Kang Dong Joo (Yoo Yeon Seok) and Yoon Seo Jeong (Seo Hyun Jin) to become a great doctor who prefers patients health more than money and power.

“Doctors” stars Korean actress Park Shin Hye. As the title suggests, the “Doctors” series will tell you about the profession of a doctor in a hospital. In this series, Park Shin Hye competes acting with actor Kim Rae Won who will play the role of Hye Jung’s teacher. The drama that lifted the romance genre was directed by Oh Choong Hwan whose script was written by Ha Myung Hee. This “Doctors” series is a drama of reality in the relationship between physician and patient and social prejudice of educational background and origin. It tells about Yoo Hye Jung (Park Shin Hye), a very stubborn student at her school and often annoys other students. She has many injuries from her past. Therefore, Hye Jung always closes her heart to others. But, she changes after meeting her teacher, Hong Ji Hong (Kim Rae Won) who plays an important role in transforming her life from a helpless thug into a loving doctor. Both are in love filled with twists and problems. Then how the love story between Hye Jung and her teacher Hong Ji Hong will be?

Golden time is a medical term for the best time in the handling of emergency patients for the prevention of stroke or death. This drama tells about the handling of patients at the ERC Hospital Sejong, Haeundae, Busan. Kang Jae In (Hwang Jung Eum) is a medical graduate of Seoul University. She is also the sole beneficiary of the Ikhyo Foundation which has a medical university and 5 hospitals, one of which is Sejong Hospital. Jae In decides to become an intern at Sejong Hospital in order to be close to her lover and to hide her identity as a granddaughter of the hospital director. Meanwhile there is Lee Min Woo (Lee Sun Kyung) who works as a doctor who works part time in oriental medicine. He is smart in theory but lacks experience in practice. Under the guidance of Professor Choi In Hyuk (Lee Sung Min), Min Woo and Jae In strive to become professional doctors with their work. Many mistakes are often made by Min Woo and Jae In, but they are not discouraged and increasingly motivated.

Park Shi On, an autistic person wants to be a doctor. As a child, he saw his rabbit and his brother die. Her brother was struck by the ruins while helping her find objects in the former mining area. Rabbit died when his basket was thrown by his father who was drunk and angry. Two deaths bring Park into the path of becoming a potential doctor. He studied hard to memorize and understand medical materials even from the age of 8 years. Since then, Park has been a different person. He wants to fight to realize his brother’s dream. A private hospital recruited him as a resident doctor with several conditions. During the apprenticeship process, he must always be supervised by his senior. His employment report will be evaluated six months later. Unfortunately, when performing the first operation, he constantly shows a repetitive attitude to the instructions. That means autism is not fully healed. Park was almost dismissed, if there was no guarantee from the hospital director that he deserved a chance. He also apprenticed in the children’s ward for six months. Hospital intrigue, disagreement with seniors, to problems with her mother who appeared after the 20-episode drama. Park is faced with many problems. Not only Park who studied, but friends and seniors in the hospital also learned how to be a good doctor. The drama stars Joo Won as Park Shi On.

August 24, 2017 Tri Comments Off on [RANK AND TALK] 3 Korean Idols Who Have Unique and Charming Eyes
MUSIC Rank&Talk

May 18, 2017 Tirta Comments Off on Jo Kwon 2AM to Play in a New Musical titled ‘Evil Dead
DRAMA MOVIE VIDEO

May 31, 2017 Tirta Comments Off on Interesting Stories Behind Korean and Hollywood Movie Castings
DRAMA VIDEO