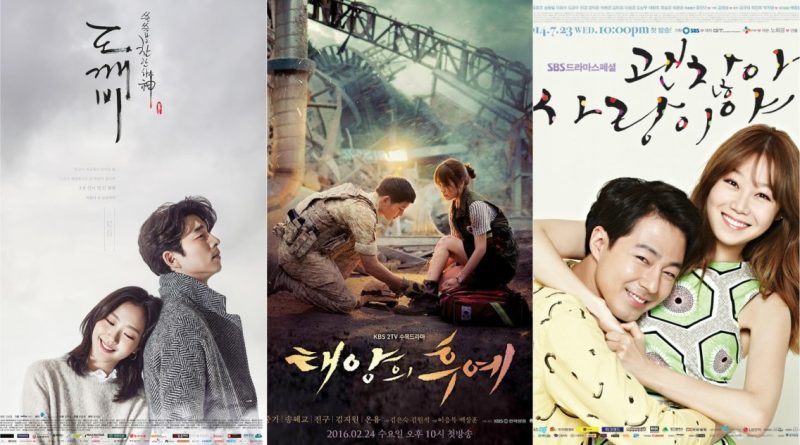 The four dramas below are phenomenal in their day. They are so famous and popular and create a syndrome of its own. Through this drama also the names of Song Joong Ki, Kim Soo Hyun, and others raised. Not only the main character, but the supporting cast began to get attention thanks to the popularity of these dramas. Here is the list of dramas you want to watch again.

Yoo Shi Jin (Song Joong Ki), is a South Korean soldier who served as a captain in special forces. Shi Jin is often assigned to a dangerous war country. One day, Shi Jin and his friend Seo Dae Young (Jin Goo) suddenly involved in a riot of citizens because there are thieves. As authorities, they tried to break the situation and sent the wounded apes to the hospital. The thief took Seo Dae Young’s mobile phone. Dae Young was trying to chase the thief to the hospital. They both went to the hospital and searched for the thief. Long story short, they met and Daeyoung mobile phone also managed to return. This is where the beginning of the story begins. Shi Jin there even teases the doctor, Kang Mo Yeon (Song Hye Gyo). Mo Yeon even thought Shi Jin as a mafia member who tortured her members. Once explained, Mo Yeon finally understood that Shi Jin is a soldier. They began to show interests with each other.

This drama tells about Kim Shin, a warlord from Goryeo in the days of the empire first. Kim Shin’s boldness makes Goryeo’s young king Wang Yeo feel jealous that Kim Shin’s position is more respected by his people. Wang Yeo is also the husband of Kim Sun (sister of Kim Shin). And this situation makes Kim Sun dilemma, she is confused whether to side with her husband or her brother. Finally this hatred Wang Yeo made him have a wicked plan to get rid of Kim Shin. Kim Shin was stabbed with a sword by his own king and exiled. Apparently, Kim Shin is not dead yet. The sword that is on Kim Shin’s chest cannot be revoked, which means he will continue to live with the sword stuck in his chest. He can only die if the sword in his chest is pulled out. And comes Ji Eun Tak, the girl who is destined to be Goblin’s bride and the only person who can release the sword from Kim Shin’s chest and make Kim Shin go quietly. Kim Shin falls in love with the bride Goblin. Ji Eun Tak becomes the first love Kim Shin from 900 years old he lived and Eun Tak fell in love with Kim Shin. Ironically, if Eun Tak pull his sword from Kim Shin’s chest, he will lose Kim Shin. On the contrary, if Kim Shin’s sword is not released, Eun Tak’s life will be threatened because her destiny is to be a Goblin bride who releases the sword in Kim Shin’s chest.

This drama tells of an alien who has various super abilities such as teleportation, telekinesis, etc. and has lived on earth for 400 years. He came to earth to conduct a study, but because of an incident, he had to wait another 400 years to get back to his planet. Until the time comes, Do Min Joon (played by Kim Soo Hyun) works as a lecturer. However, in just 3 months, all the principles that he has guarded for so long are destroyed because of his neighbor, Chun Song Yi (played by Jeon Ji Hyun), who turns out to be the reincarnation of Seo Yi Hwa. Song Yi is a top artist whose life is targeted by a criminal. Min Joon tries to save Song Yi from the villain. Jeon Ji Hyun’s ridiculous behavior in this drama is highly entertaining to the audience, and Kim Soo Hyun’s acting is also deemed to be cool and very interesting.

August 6, 2017 Tirta Comments Off on Actors Who are Working Hard Before Starting Their Military Service
MOVIE VIDEO

April 21, 2017 Tri Comments Off on Hallyu Stars Show Their Support in the Premiere of ‘One Day’
STAR VIDEO