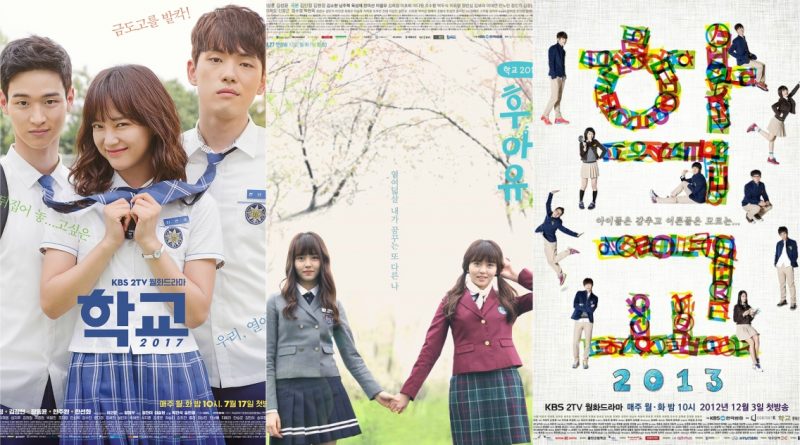 KBS drama ‘School 2017′ starring Ra Eun Ho (Kim Se Jeong), Hyun Tae Woon (Kim Jung Hyun), Song Dae Whee (Jang Dong Yoon), and others. this drama tells the story of an 18-year-old high school student who struggles to realize his dreams in the future. All students in this school are sorted according to the rank they get. Therefore, to escape the frustration, they discover how to make their own way in this world that seems to be a stagnant school and home cycle. Ra Eun Ho has a very bad grade in school but she wants to enter the same university through special recognition because of her ability to draw her webtoon. Ra Eun Ho has a romance story with Hyun Tae Woo, a troublemaker in his old school in America so he is moved to Korea. Although he is arrogant and rude to others, teachers and students could not tell him anything because his rich dad had invested in the high school.
2.’Who Are You: School 2015’

The drama ‘Who Are You: School 2015’ is a KBS school series drama that aired in 2015. Raising the theme of school, family, and dreams, this drama has become one of the favorite dramas for Korean drama lovers. ‘School 2015’ starring young actors, such as Kim So Hyun, Yook Sung Jae, Nam Joo Hyuk, and many more. ‘School 2015′ tells the story of school life in Segang High School which is the most prestigious private school in Gangnam, Seoul. Ko Eun Byeol (Kim So Hyun) is the most popular girl at school, but one day she disappears mysteriously. On one side is Lee Eun Bi (Kim So Hyun) who attempted suicide and was rushed to the hospital. Lee Eun Bi wakes up and does not remember her identity, then starts her life as Ko Eun Byul. In the school, she lives life like a high school student in general. She is also loved by two men, Han Yi An (Nam Joo Hyuk) and Kong Tae Gwang (Yook Sung Jae).