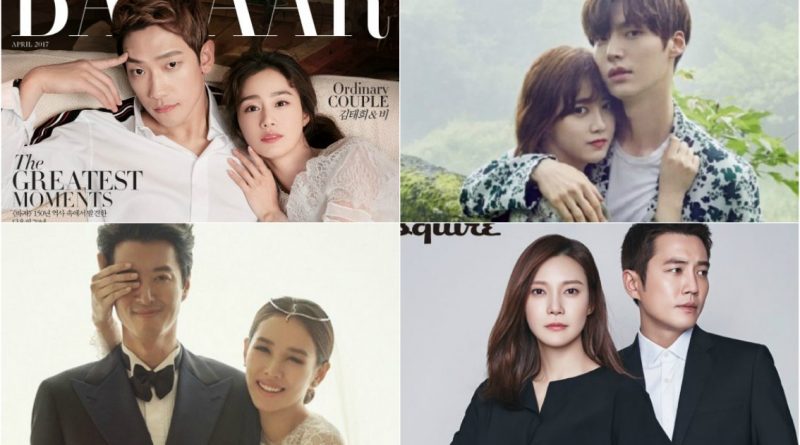 This year there are several celebrity couples who decided to get married. After marriage they start married life and their lives are always highlighted because they become more intimate. Even sometimes they make the fans jealous. Who are they?

Rain and Kim Tae Hee got married last January. Since then their family life has always been public attention. Rain spent more time with his wife during her pregnancy. They were caught on a trip to Europe during the holidays. Not only that, Rain also always goes home after finished filming. He said that he should help Kim Tae Hee who is in the days of late pregnancy.

The couple is also recently married, precisely in May. It is rumored that both will also star in ‘Newlywed Diary’ but still no confirmation. Their intimacy is evident since they frequently wear couple outfits to important events, for example when they come to the jewelry launch event as husband and wife for the first time wearing all the same black clothes.

The couple is also a newly married couple, and they got married in May. News of their marriage shocked the world of entertainment because it was so sudden. But after marriage, many people support them because they look cute and intimate to each other. On Cha Ye Ryun’s birthday, Joo Sang Wook waited her with the cake to celebrate the birthday together.

Another celebrity couple Song Joong Ki and Song Hye Kyo will also be married this year, do you think they will also show their affection just like the couples mentioned in this article? We are looking forward to their marriage life.

March 25, 2017 Tirta Comments Off on So Ji Sub’s Surprise Comeback as a Rapper
MUSIC VIDEO