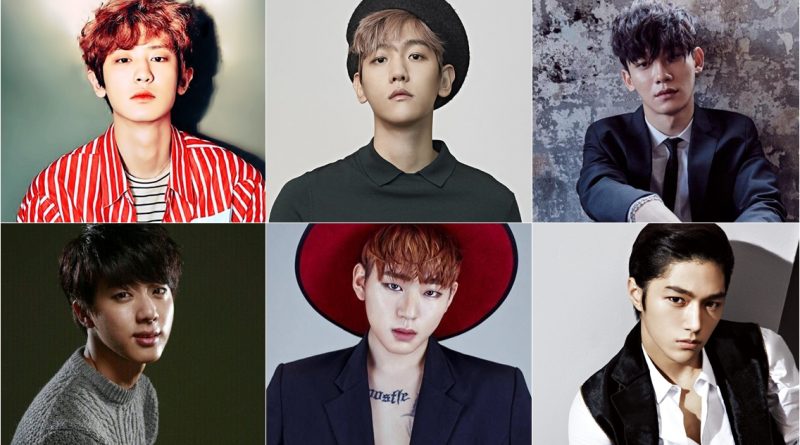 EXO’s Chanyeol, Baekhyun, Chen, BTS’s Jin, Block B’s Zico and Infinite’s L are male idols born in 1992. The six idols have the same age but their careers and experiences in the entertainment world are different. As a popular idol, these six celebrities have different career paths. Some of them are not only good at singing but have a great interest in acting. In addition, the musical genre of each entertainer is also different, and each has their respective charms. Here are 6 idols born in 1992.

Park Chanyeol was born in Seoul, South Korea on November 27, 1992. He attended Hyundai Chungun High School in Dong-gu, Ulsan. When he was 16 years old, he studied at a private acting institute. He played as a drummer, with a band formed at his school, and won second place in a television model contest. Chanyeol was incorporated into SM Entertainment at SM Casting System in 2008. Together with other EXO members, Suho and Kai, he made a brief appearance in the TVXQ video clip entitled “HaHaHa Song” in 2008. He also appeared in Girls’ Generation entitled “Genie” in Japanese which was released in August 2010. He was the last member to be introduced on February 23, 2012.

Baekhyun is a South Korean singer, dancer and actor born on May 6, 1992 in Bucheon, Gyeonggi, South Korea. Baekhyun was born with the full name of Byun Baek-hyun. Regarding his nickname, Baekhyun has many nicknames, such as Baekhyun, Bacon, he also has a nickname Yellow Towel, while many fans call him Sun Gun, and various other nicknames, many people who call Baekhyun dengna name given by each respectively, such as the Tao who gave the Beef nickname to Baekhyun EXO. Baekhyun EXO is the second child. Baekhyun already has a desire to be a singer since he was in the 4th grade. While still in elementary school he also once said that he will later become a famous celebrity and now all that has become reality, high school Baekhyun formerly at Jungwon High School, Baekhyun time ever joined in a band, which in the band this is himself a vocalist, and the band from Baekhyun has once won an award at a local rock festival. Baekhyun once said that he had auditioned many times, but was rejected, Baekhyun was practicing singing loudly, and when it was, a talent scout from SM found him and told Baekhyun to audition for SM Entertainment, Baekhyun became a SM Entertainment trainee in 2011, and Baekhyun is an EXO member who undergoes the fastest trainee period, Baekhyun undergoing a trainee for approximately 1 year, and after that he was announced by SM as one of the members of EXO.


Chen is the 4th member that SM Entertainment introduced as an EXO member. Not so long, Chen only takes about 11 months to become a trainee in SM Entertianment. He is a hard worker, so he gets the position of playing vocals. Chen is famous with his golden voice that is mentioned to be the best voice among the other EXO members. Chen was not born in a family who struggled in the music world. At first his parents did not agree Chen became a singer. But the ban changed when Chen’s parents learned that his son was labeled by SM Entertainment. Chen contributed in the most popular drama OST of ‘Descendants of the Sun’ titled ‘Everytime’. In the song Chen collaborated with Punch that produced a good song. Previously Chen has also filled the drama OST ‘It’s OK It’s Love’ which co-starring D.O EXO. Chen’s last fill out the drama OST drama ‘Moon Lovers: Scarlet Heart Ryeo’ with Baekhyun and Xiumin.

Jin BTS is a South Korean probe who was born in Gwacheon, South Korea on December 4, 1992, Jin BTS was born with the full name of Kim Seok Jin and now he is known by the stage name Jin. Jin is a member of a singer group called BTS, and because this is also Jin known as Jin BTS. BTS or Bangtan Boys is a group of male singers from South Korea, BTS first appeared in the year 2013 ago, when the BTS debuted with their main song entitled No More Dream. The BTS consists of 7 members, one of them is Jin BTS, and the 6 other members are Rap Monster BTS, J-Hope BTS, Jimin BTS, VTS, and Jungkook BTS. Before BTS debut, all BTS members enter trainees first, and Jin BTS has been in trainee for 3 years, when the trainees of BTS members who are friends with the first Jin is V or Kim Taehyung, they both have many hobbies and likes same , so this makes them closer and until now VTS is the BTS member that is closest to Jin BTS. after 3 years of training Jin managed to become one of the members of this BTS group, and in BTS, Jin is the oldest member among the other members.

Zico was born in Mapo, Seoul on September 14, 1992. Zico attended Seoul Music High School with a vocal performance majors. In the lyrics of the song “Release,” he stated that he spent a year studying abroad, namely in Canada and China, as well as three years in Japan. Zico started his career as a rap singer in the underground hip hop scene. In his early teens he and Rap Monster were part of a hip-hop crew. He used the stage name “Nacseo” in the Japanese underground hip hop scene with crew “Dope Squad” and “Undisputed.” Zico has confirmed that as a teenager, he auditioned for SM Entertainment. He officially debuted as a duo with Park Kyung under the name “The Harmonics” in Korea in 2009 with a digital single titled “The Letter.” That same year, he joined Stardom Entertainment. Zico performed the rap section for IU’s song “Marshmallow.” He also appeared in Cho PD’s “Expectations for K-Hip Hop” and Jung Seul Gi’s “Outsiders”. In 2010, Zico released his first mix tape entitled Zico on the Block. Mix tape is well received by the Korean hip-hop stage. Zico debuted as the leader of Block B male group on April 15, 2011 with their first promotional single entitled “Freeze.” Zico produced their debut mini album, Welcome to the Block.

One member of the group INFINITE who spreads his wings in the acting world is L. Several times L successfully starred in several dramas that helped catapult his name. For example, the drama ‘My Lovely Girl’ that mendapuk L as second lead actor. L debuted with INFINITE in 2010 with Wollim Entertainment. Being the main vocalist of this group, L does not necessarily take pride and stop by just being a singer. The proof L also successfully debuted as an actor in his first drama in 2011 by starring in a drama titled ‘Jiu’. The last and current show, L is starring in her first drama drama ‘Ruler: Master of the Mask’ which combines L’s acting with the two main actors Yoo Seung Ho and Kim Soo Hyun. L is a singer and an actor who always believes in himself. A particularly preferred part of the body is the part of the nose that he thinks is the best part of the rest of the body. Men who like this black color does have a unique habit that is not commonly done by a man. For example, a cooking hobby that he often do both at home and in the dorm.

April 20, 2017 Tirta Comments Off on Why Did Yoo Ah In Join ‘Chicago Typewriter’ If He Has Health Problem?
DRAMA VIDEO