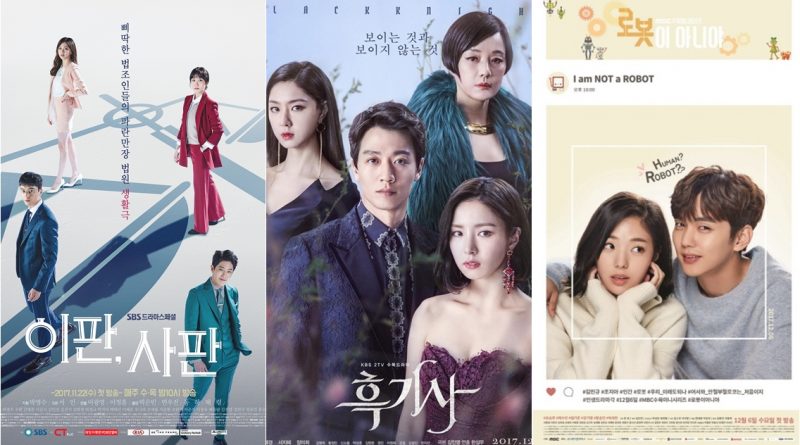 The war between new Wednesday-Thursday drama in 2017 is already started. Who will get the highest audience rating? Last Sunday, drama KBS 2TV ‘Mad Dog’ was in first position. Meanwhile, SBS drama ‘Nothing to Lose’ was first aired on November 22nd. MBC drama ‘I’m Not A Robot’ and KBS 2TV ‘Black Knight’ will air simultaneously on December 6th.

‘Nothing to Lose’ which 2 weeks earlier aired this managed to reach the first position when its premiere that marks a good start. After that the rating goes down but viewers are still waiting for it.

‘Nothing to Lose’ is a project that tells of Lee Jong Joo (Park Eun Bin), a judge who wants to reveal the secret of his brother and Sa Ui Hyun (Yeon Woo Jin), the elite judge who will confront him. In the middle of Kim Ka Young’s murder case that leads to Do Han Joon (Dong Ha), the truth behind the various cases and characters around him is increasingly intriguing.

In addition, there are dramas that will air on the 6th.

First, KBS 2TV drama ‘Black Knight’ which tells about a man who violated takdri and did dangerous things for the sake of the woman he loved. ‘Black Knight’ centered on fantasy melo drama starring Kim Rae Won and Shin Se Kyung.

Then there’s MBC ‘I’m Not A Robot’. This romantic comedy drama tells the story of Kim Min Kyu (Yoo Seung Ho) who has the perfect physical, wealth, and craftsmanship, it’s just algergi to humans and has never dated. Then Min Kyu falls in love with a woman named Jo Ji Ah (Chae Soo Bin) who is disguised as a robot. This genre will combine robotic material with romantic comedy. Moreover, this will be the first romantic comedy dramas Yoo Seung Ho and Chae Soo Bin who plays 3 characters.

At the press conference ‘I’m Not A Robot’, PD Jung Dae Yoon discusses the drama competition, “The longer it gets intense. Fortunately, with a wide variety of genres, viewers have many options to watch. ”

There will be a tight rating competition between ‘I’m Not A Robot’, ‘Black Knight’ and then the drama ‘Nothing to Lose’ which has started earlier. Who will lead for Thursday’s drama lineup?

August 22, 2017 Tri Comments Off on Although Filled With Famous Stars, ‘VIP’ Has No ‘Bromance’
DRAMA VIDEO