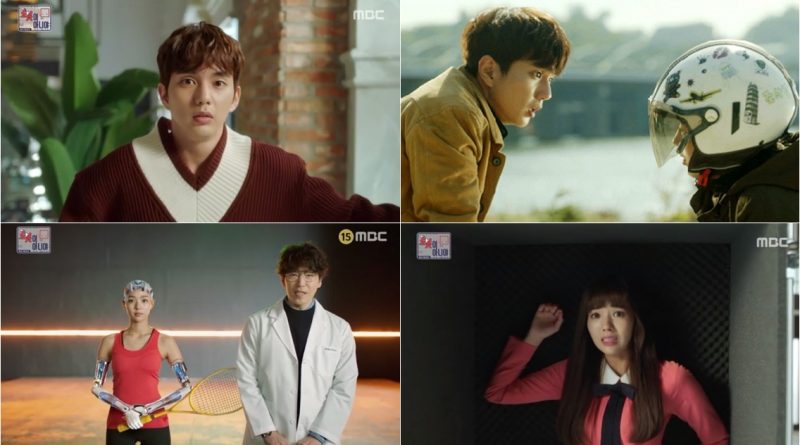 On the 6th, new Wednesday-Thursday drama MBC’s ‘I’m Not A Robot’ aired episodes 1 and 2. The episode describes Kim Min Kyu’s (Yoo Seung Ho) and Jo Ji Ah (Chae Soo Bin) horrible first encounter. Kim Min Kyu was given the freedom to not do the military because of his allergic disease to humans. Kim Min Kyu is the leader of KM finance company, living with a luxury sports car and showing off his wealth.

But Oh Park Sa as a psychiatrist gave advice on his treatment, “What are you going to do? You cannot date and will continue to be a monster, ” he said. “But there will be someone you love one day”, entertaining Oh Pak Sa. Kim Min Kyu just replied, “If any, she must be abnormal.”


The first encounter of Kim Min Kyu and Jo Ji Ah was terrible. Kim Min Kyu order figure at Jo Ji Ah. Jo Ji Ah does not know any foreign objects inside the box of her figure, Kim Min Kyu got angry and found something that will not pay her.

Jo Ji Ah misunderstood and told a lie to get her money, there was a fight when trying to catch Kim Min Kyu. When the reaction to his allergic emerged, Kim Min Kyu escaped. He knew his necklace has disappeared and suspected Jo Ji Ah.

Hong Baek Kyun (Uhm Ki Joon) introduced the android aji 3 robot (Chae Soo Bin) to Kim Min Kyu via video. “We invite you to look at the preview of Aji 3. According to the contract, you are the new owner of Aji 3. Please make a payment of 50 million won,” said Hong Baek Hyun.

Kim Min Kyu went directly to Baek Kyun’s laboratory to meet Aji 3. Kim Min Kyu is allergic to humans but because he knows that the object is a robot, his allergies do not react. Hong Baek Gyun said, “She can feel emotions and read human expressions. We will live in an age capable of taming robots.”

Hong Baek Kyun got a chance to test Aji 3 at Kim Min Kyu’s house. However there was a problem with Aji 3, she was forced to contact his ex-girlfriend Jo Ji Ah. Hong Baek Kyun offered her part-time job to become a robot with a wage of 10 million won.

Jo Ji Ah accepted Hong Baek Kyun’s offer to pay to her brother. Jo Ji Ah went to Kim Min Kyu’s house, disguised as a robot. Jo Ji Ah screamed as soon as she saw Kim Min Kyu, it adds tension to what will happen between them next.