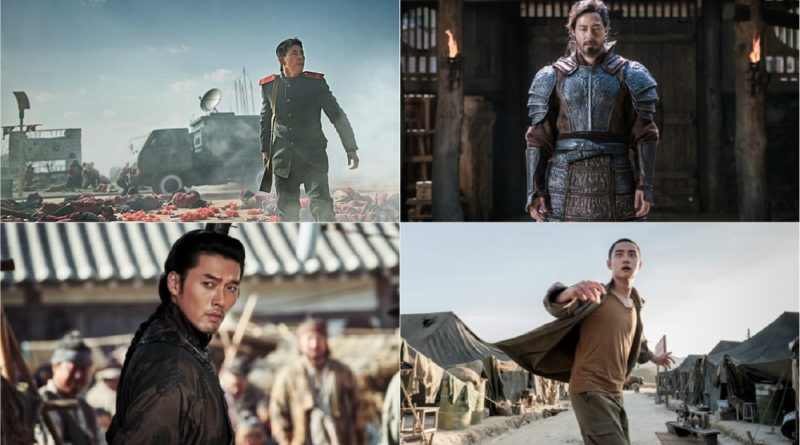 Starting from Jung Woo Sung, Jo In Sung, Hyun Bin, to Do Kyung Soo. The next year’s awaited films released the first still-cuts of the movies.

On December 8th, the NEW distributor released the movie line-up in 2018, which includes many anticipated films and is expected to celebrate the 10th anniversary such as ‘Steel Rain’, ‘Outbreak’, ‘Ansi Fortress’, ‘Swing Kids’ and others.

First, the blockbuster ‘Steel Rain’ which announces the start of the winter war of 2017 by opening movie views in the 10th anniversary of NEW. The movie ‘Steel Rain’ tells of a situation in which a North Korean coup emerged and North Korean forces descended to South Korea.


The presence of this film is very enthralling with keen insights from director Yang Woo Suk and the gripping scene in the film history. The film is anticipated with the perfect energy achieved by meeting Jung Woo Sung with Kwak Do Won.

‘Ansi Fortress’ is a blockbuster war movie that will reveal the great battles of Yang Man Chun and Danf Tae Jong from the most hot Goguryeo soldiers in East Asian history. In addition to Jo In Sung who plays the role of Yang Man Chun who made the victory against Tang that is considered the most powerful in Chinese history, this film starring amazing actors including Nam Joo Hyuk, Park Sung Woong, Bae Sung Woo, and others.

‘Outbreak’ is a blockbuster action film depicting Lee Chung’s (Hyun Bin) struggle in saving Joseon towards rising from the darkness. The best actors such as Jang Dong Gun, Jo Woo Jin, Kim Eui Sung, Jeong Man Sik, and others starred in this movie. With the appearance of the film ‘Outbreak’ which is the first penanpila in Korea will break the Korean film after the movie ‘Train to Busan’ which causes zombie syndrome.

‘Swing Kids’ will make audience laugh with the impressive ‘tap dance’ in the Geoje mission camp in 1951. The film invites the audience to a dream stage created by the ‘Swing Kids’ dance group consisting of Do Kyung Soo ‘Rho Ki Soo’ Young Korean soldiers, Park Hye Soo, Oh Jung Se, Kim Min Ho, and others. moreover, Kang Hyung Chul has attracted attention with his works ‘Scandal Makers’ and ‘Sunny’ which capture a fun and warm sense of sensibilities and shows different background music.