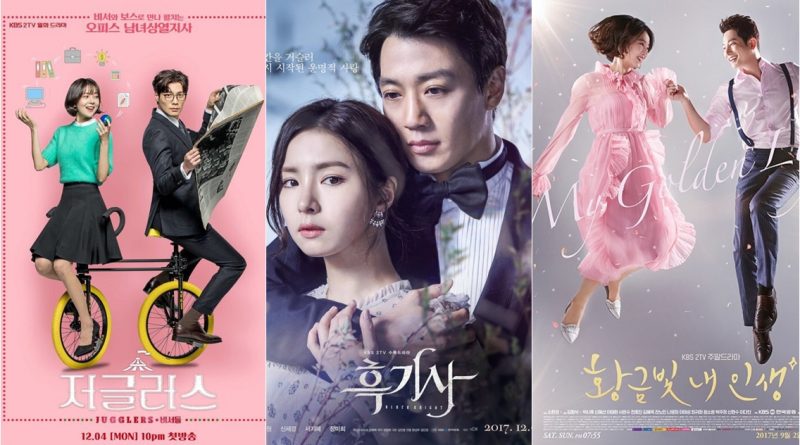 All KBS 2TV’s Monday-Tuesday, Wednesday-Thursday and weekend dramas ranked 1st in viewers rating. On the 12th, KBS drama ‘Jugglers’ got 1st place with a 1.2% increase for viewership ratings to 8%. Episode 4 depicted Nam Chi Won (Choi Daniel) who becomes a tenant at secretary Chwa Yoon’s (Baek Jin Hee) house and gives a full twist story. At the end of the episode, Chi Won slowly learns about the difference between interest and distraction, he has information from Yoon ‘100 questions 100 answers’ and the changes are awaited.

KBS2’s drama ‘Black Knight’, which ranked 1st for viewers and topics ratings in just 2 episodes, returned to number one for episode 3 yesterday.

In episode 3, it started from the relationship of Moon Soo Ho (Kim Rae Won), Jung Hae Ra (Shin Se Kyung), Sharon (Seo Ji Hye) 200 years ago. The romance of Soo Ho and Hae Ra who is continuously given, has filled the screen.

KBS2’s weekend drama ‘My Golden Life’ went through the same thing. The development of viewer ratings reached 41.2%. This rating of more than 40% is called exceptional in the drama industry. Seo Ji Ah – Seo Ji Soo is back in her own place, Choi Do Kyung (Park Shi Ho) begins her openly love of Seo Ji Ahn.

The KBS drama lineup that shows its confidence with the statement “Young and fresh” once again attracts viewers. Moreover every day, this drama shows various genres such as romantic comedy, melodrama, and family drama.

Jugglers airs every Monday and Tuesday at 10 pm, Black Knight Wednesday Thursday at 10pm, and My Golden Life airs every Saturday and Sunday at 19.55 South Korean time.

July 31, 2017 Tri Comments Off on [RANK AND TALK] Top Three Korean Stars With Their Biological Siblings