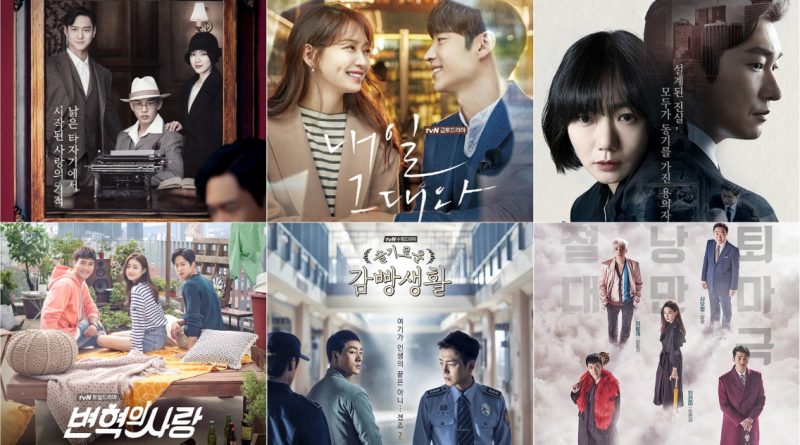 This year, a lot of cable tv dramas are comparable with terrestrial tv with its amazing perfection and cast. What’s more, the cable tv drama has made a lot of effort by presenting unique genre and material this year that no audience has ever seen before.

It is not easy for tvN to make the drama known as the famous drama in 2017. No work has yet to surpass the fame of ‘Goblin’ that aired earlier this year. In February, the fantasy romantic drama ‘Tomorrow With You’, starring Shin Min A and Lee Je Hoon, replaced the drama ‘Goblin’, but this drama must be satisfied with an unsatisfactory viewer rating of only a maximum rating of 3.9%. The drama ‘Chicago Typewriter’, starring Yoo Ah In, Lim Soo Jung, and Ko Gyung Pyo is also expected this spring because it has a hebar cast and a ‘praised writer’, but character setting and development are disrupted causing this drama to attract attention .

The drama ‘Stranger (Secret Forest)’ starring Bae Doo Na and Cho Seung Woo was promoted with the highest rating of 6.6% thanks to a detailed solitary story and progress. The drama ‘Live Up To Your Name’ starring Kim Nam Gil and Kim A Joong is also loved by having many fans and being able to keep up with demand in the second season. But the tvN drama also suffered from lethargy. The drama ‘Revolutionary Love’ which aired last October was Choi Siwon’s first drama after his conscription became a hot topic before his broadcast. But this drama gets an unsatisfactory rating by only getting 2-3% only.

However, tvN aims to advance its drama with three new dramas scheduled to air by the end of the year. The first drama of ‘Prison Playbook’ by director Shin Won Ho who recorded the highest viewer rating of 8.6% in episode 9, and ranked first for 5 weeks in a row on all tv including terrestrial tv. With the background of the new jail and comedy that is added black comedy and a great actor raise the popularity of tvN drama. In addition, the drama ‘Rude Miss Young-Ae Season 16’ will return aired after airing for more than 10 years. The last one is the drama ‘Hwayuki’ which became a hot topic for starring Lee Seung Gi who became his first drama after this draft will help increase the popularity of tvN drama.