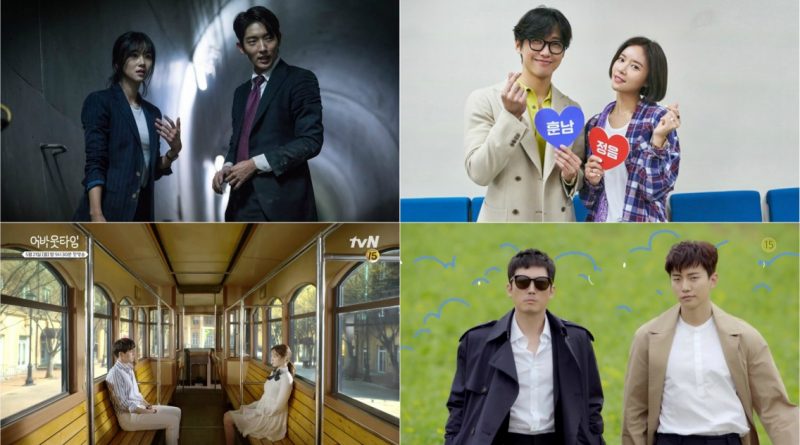 Starting from Mei, line-up of hot dramas is ready to air and certaintly to entertain the drama fans. Not only an interesting and unique plot, line-up of actors and actresses with dazzling visual will dominated the main screen in May. Two broadcasting station in Korea, tvN and SBS will be airing two new dramas in May. that will surely capture the viewers heart. tvN has prepared to unveil its newest drama ‘About Time’ with Lee Sung Kyung dan Lee Sang Yoon playing as the main leads and ‘Lawless Lawyer’ which will colored with combination of Lee Joon Gi and So Ye Ji. Just exactly like tvN, SBS has also prepared its newest drama that will entertain their veiwers such as ‘Hoon Nam Jung Eum’ through the combination of Nam Goong Min and Hwang Jung Eum and ‘Greasy Melo’ which Jang Ryeo Won, Lee Jun Ho and Jang Hyuk will be the main leads. A super unique story will make the month of May be totally fun and colorful. For those drama fans who are curious about these four dramas, here’s the details of these four dramas that is set to air later In May.

tvN’s newest drama entitled ‘Lawless Lawyer’ is set to air in May this year. This drama told a story of a lawyer who often ignores the law and use his way to fight for justice. The Lawyer named Bong Sang Pil as an ex Gangster that became a lawyer after witnessing the death of his mother. Bong Sang Pil who is very vengeful because he couldn’t get the justice for his mother death. He grew up and turned himself to a lawyer to pay for a revenge on behalf of his mother. Bong Sang Pil later will meet a woman lawyer named Ha Jae Yi, a lawyer who believes and hold onto the principle of laws. Lee Joon Gi will play the role of Bong Sang Pil meanwhile Seo Ye Ji will play the role of Ha Jae Yi. This drama is directed by PD Kim Jin Min who was once working with Lee Joon Gi in the movie ‘Time between Dog and Wolf’. ‘Lawless Lawyer’ is set to air on 21st of May every Saturday and Sunday at 9 pm (GMT9+).

Another tvN’s newest drama is ‘About Time’ that is set to air this May. This drama told a story of a woman with amazing ability named Choi Michaela. Choi Michaela was born with the ability to see other people’s lifespan. She later will meet a guy named Lee Do Ha who has the ability to stop the time. The two of them will eventually involve in a love affair and Choi Michaela will try to tempted Lee Do Ha after she fell in love with him. The Two will work together and try to prevent people from their death. Lee Sung Kyung will play the role of Choi Michaela meanwhile Lee Sang Yoon will play ethe role of Lee Do Ha. This drama is directed by Kim Hyung Sik and is set to air on 21st of May every Monday and Tuesday at 9.30 pm (GMT+9).

SBS will also realease their newest drama in May entitled ‘Hoon Nam Jung Eum’. This drama told a romantic story of a man named Kang Hoon Nam and a woman named jung Eum. Kang Hoon Nam is a man full of charm and has been adored by all the women around him but he doesn’t believe in true love and has no intention to get into a serious relationship. Unlike Hoon Nam, Jung Eum is a woman who dreamed of a true love and wanting a serious romantic relationship. The two of them will finally met and started to get involve in love affair. Nam Goong Min will play the role of Hoon Nam and Hwang Jung Eum will play the role of Jung Eum. Through this drama, Nam Goong Min finally reunited with Hwang Jung Eum after seven years since their last work ‘Can You Hear My Heart?’. This drama is directed by PD Lee Jae Yoon and is set to air in Mei every Wednesday and Thursday at 10pm (GMT+9).

Not only ‘Hoon Nam Jung Eum’, SBS will also release its newest drama entitled ‘Greasy Melo’ in the early of May. This drama told a story of a man named Seo Poong who tried to survive through food and love. Seo Poong was a chef of a best Chinese restaurant in town. Then his popularity went down and he ended up working in a kitchen of a small Chinese restaurant. Meanwhile, he will meet the owner of the building named Doo Chil Sung who was once a gangster and has been held in Jail for 5 years. The two of them will get into a triangle love affair with a woman named Dan Sae Woo. Lee Jun Ho will play the role of Seo Poong, Jang Hyuk will play the role of Doo Chil Sung and Jung Ryeo Won will play the role of Dan Seo Woo. This drama is directed by PD Park Sun Ho and is set to air on 7th of May every Monday and Tuesday at 10pm (GMT+9)