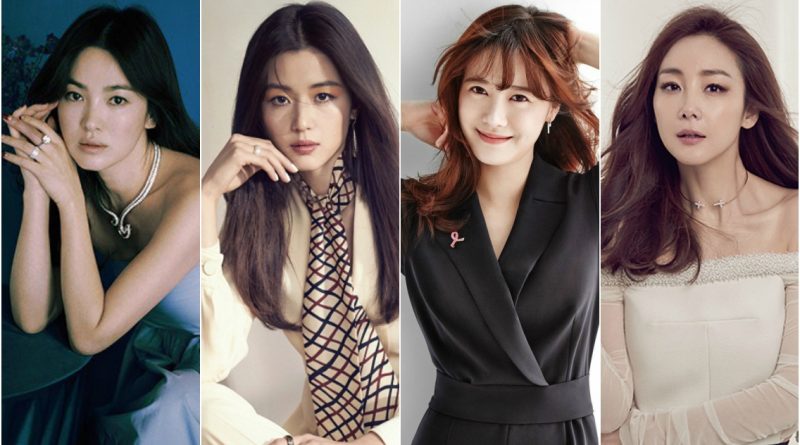 The Beautiful actress who will marry actor Song Joong Ki was born in 1981. Many people do not believe how she can look so youthful when she was more than 30 years. Song Hye Kyo debuted as a school uniform model in 1996 after winning the ‘Sunkyung Smart Model Contest’. After that, she debuted as an actress through a small role that she got in the drama ‘First Love’. The drama she starred has always been popular and become hits, such as: ‘Autumn in My Heart’, ‘Full House’, ‘The Winter The Wind Blows’, and the most recent one is ‘Descendants of The Sun’.

Jun Ji Hyun is an actress whose became popular after her role in the romantic comedy ‘My Sassy Girl’ in 2001. Similar to Song Hye Kyo, Jun Ji Hyun was also born in 1981 and she debuted in 1997 as a model of ‘Ecole Magazine ‘. Jun Ji Hyun got the lead role in dramas ‘My Love from The Star’ and ‘The Legend of the Blue Sea’ and both received a satisfactory rating. The woman who currently is pregnant with her second child is always praised for her unique beauty. It is no wonder that she has been chosen as a brand ambassador for several beauty products.

Who does not know the character Geum Jan In KBS drama ‘Boys Over Flower’? Yes, Goo Hye Sun is a very popular actress after playing the drama. Although at her age pf 32 years old, there are still many people who do not believe how could she still look like a woman who is in her 20s. Goo Hye Sun got married to actor Ahn Jae Hyun in 2016, and she has starred in several dramas, such as ‘The King and I’, ‘Boys Over Flower’, ‘Angel Eyes’, and ‘Blood’.

The actress who played in this ‘Winter Sonata’, seems to have eternal beauty. Choi Ji Woo who was born in 1975 still looks young and doesn’t age at all since she looks the same compared to herself years ago. Choi Ji Woo, who made her acting debut through the drama ‘War and Love’ in 1995, has played many roles. Some of the dramas she has played are ‘Winter Sonata’, ‘Stairway to Heaven’, ‘The Suspicious Housekeeper’, and ‘Twenty Again’.