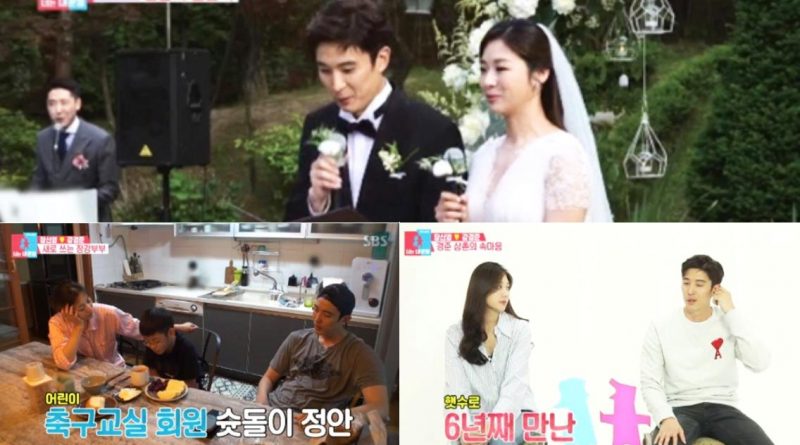 In SBS program ‘Same Bed Different Dreams 2 – You Are My Destiny’ which aired in 11th told a story of the newly wed couple Jang Shin Young and Kang Kyung Joon.

Jang Shin Young and Kang Kyung Joon revealed their love story in SBS ‘Same Bed Different Dreams 2’ they got married somewhere in Seoul in 25th of May after five years of dating. Their wedding celebration was held outside the venue of the ceremony and the footage has finally been released that makes all the viewers can’t help but grin widely, especially when the celebration was held with the family and the acquaintances.

Jang Shin Young and Kang Kyung Joon made vows in ther wedding and showed tears that an down from their eyes. The two of them said, “This is a hard decision. Some people said that we’re impossible and we wouldn’t last” he said before adding, “After five years we’ve finally proved our love and settle with it” he said. Seo Jang Hoon that was watching the footage in studio started to wept.

Jang Shin Young was once divorced in 2009 and has one son named Jung An,. Kang Kyung Joo now has accepted Jang Shin Young’s son and take care of him as if he is his own son. Kang Kyung Joon said, “at first I’m afraid if this is going to hurt Jung An. We celebrated the wedding happily but we weren’t sure about the child’s point of of view because he might not happy.” He said. “But he came to our wedding and celebrating it with us” he added. Then when asked about the negative comments all over the internet he said, “There are a few things in internet that of course made us a little bit upset about it”.

Kang Kyung Joon in the released clip didn’t seem like a lonely father. Kang Kyung Joon and his little family who lives in Seongsudong decided to sleep on bed with Jung An instead of his wife, Jang Shin Young. Kim Gu Ra who understand the method of his approach said, “I guess it’s better natural like this”

Jang Shin Young and Kang Kyung Joon has successfully overcome all the things that got in their way before their wedding as they finally built their own special family. Kang Kyung Joon also said, “I don’t know why I really like Shin Young, I just like her” he said, completely blinded by love with his wife. Kang Kyung Joon who can accept Jang Shin Young’s son as his own family and son received a lot of applause and admiration from the viewers.

March 1, 2017 Tirta Comments Off on Kwanghee ZE:A to Enlist in the Military on March 13