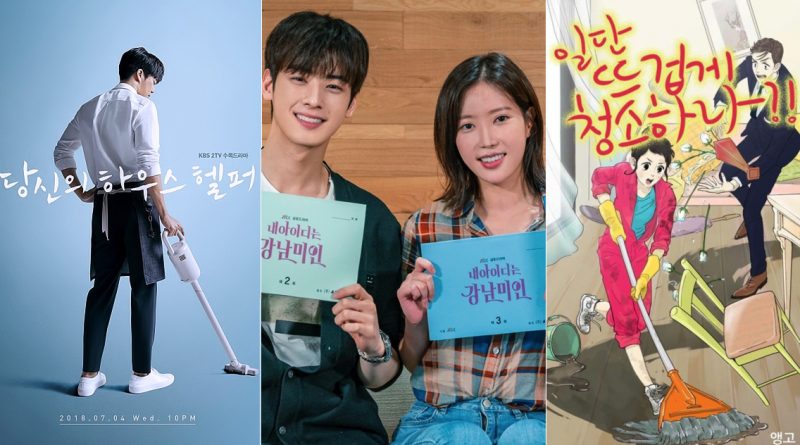 DRAMA
June 29, 2018 CastKo Clean With Passion For Now, My ID is Gangnam Beauty, Your House Helper

Drama ‘Why Secretary Kim’ recently has become the talk of the town. Park Seo Joon and Park Min Young had successfuly100 percent synchronized their characters to the original and getting a lot of positive reviews. Therefore a lot of dramas that was adapted from webtoon is also gaining a lot of attention.

KBS newest drama entitled ‘Your House helper’ is currently being prepared to air and it is a drama that was adapted from the webtoon which published by the publisher of webtoon KTOON. The original webtoon told a story of perfect man who works as a house helper named Kim Ji Woon who ended up getting involved and tangled in the complicated life of a woman.

Drama ‘Your House Helper’ successfully cast Ha Suk Jin as the main lead of the drama. This drama will also enchant the viewers by its actresses such as Bona and Go Won Hee as the main female leads.

My ID is Gangnam beauty

The Naver-released Webtoon is finally being adapted to the drama by JTBC and that is none other than ‘My ID is Gangnam Beauty’. The original work tol d a story of a woman named Kang Mi Rae who had an ugly look when she was young and getting herself bullied and then she entered a new life as she did the plastic surgery. Kang Mi Rae entered the university and experiencing a new life where she will face a lot of hardships in order to found the true meaning of beauty.

Drama ‘My ID is Gangnam Beauty’ will be played by Im Soo Hyang and Cha Eun Woo of Astro. This drama is already been anticipated by its original works’s fans.

Cha Eun Woo has a great visual but apparently he lacks of an experience in acting. Do Kyung Suk is a handsome, cold and shy guy who avoid getting close to the beautiful women because of the childhood memories where he was abandoned by his mother who was a miss Korea.
Clean with passion for now

This drama is the first appearance of Kim Yoo Jung as an adult and also the first romantic comedy drama from actor Yook Kyun Sang. The original webtoon told a love story between Gil O Sol, a student who works hard to make a living and a CEO of a cleaning company named Jang Sun Kyul who thinks that cleanliness is even more important than anything.

The appearance of Yoon Kyun Sang in Romantic comedy is also one of the reason why this drama is worth to wait.