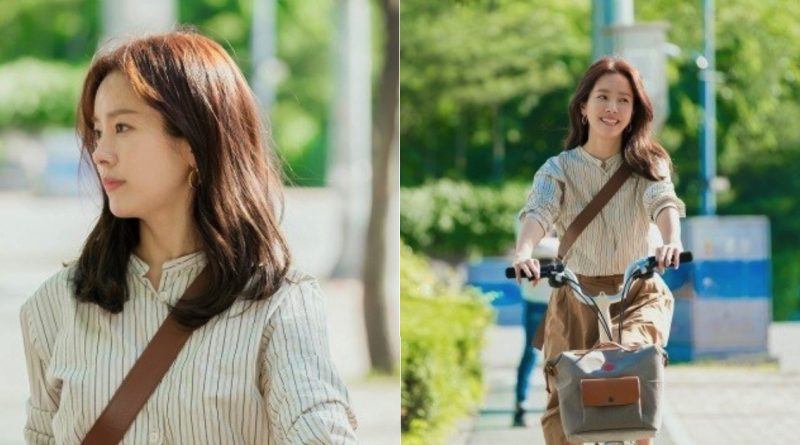 Han Ji Min has returned as a goddess in ‘Wife that I Know’ after three years of absence with a refreshing performance.

‘Wife that I Know’ told a love story of a couple’s life who changed completely with one choice that they made. This drama is filled with imagination that is expected to show love story that different than the usual.

In the released pictures, Han Ji Min looks totally lovely and she stimulates the viewers excitement towards this long-awaited drama. The smile of Han Ji Min which is bright and refreshing gives off energy to the viewers, especially through her dynamic, lovely and also full of empathy acting.

The chemistry between her and Jisung like a real life couple is expected to make the viewers fell madly in love with this drama.

Han Ji Min then showed her thought about this drama “I am very excited to greet the viewers through a good story” then she added, “I will also give all of my power and determination to make this work is full of satisfaction” she said.

Later then she said, “There are a few first meeting memories that easily be forgotten by people as the time goes by and also there’s a precious moments where we lose it because of the reality. But I guess I’d like to remember everything so that I can say ‘Oh right, it was like that that time” she said.

Tim Produksi from ‘Wife that I Know’ said that “This is the first time in three years we witnessed her passion to get into this character. She gives off a unique, refreshing and lovely energy through her acting and her dialog. Her character has a very different charm that definitely will leave the viewers in awe, especially the changes of Han Ji Min which is never seen before” he said.

Meanwhile, drama tvN ‘Wife that I Know’ is directed by Lang Sang Yeop who is known for his work ‘Shopping King Louis’ and is written by Yang Hee Sung who is known for her works such as ‘King of High School’, ‘Oh My Ghost’, and ‘Weightlifting fairy Kim Bok Joo’. The production team who has great experience in romance will become one with actor Jisung and actress Han Ji Min and they’re ready to entertain the viewers in summer 2018. This drama is set to air for the first time in 1st of August at 9.30 pm local time after ‘Why Secretary Kim’.

October 15, 2017 Ria Comments Off on Girls’ Generation Will Not Disband Although Tiffany, Seohyun and Sooyoung Have Left SM Entertainment