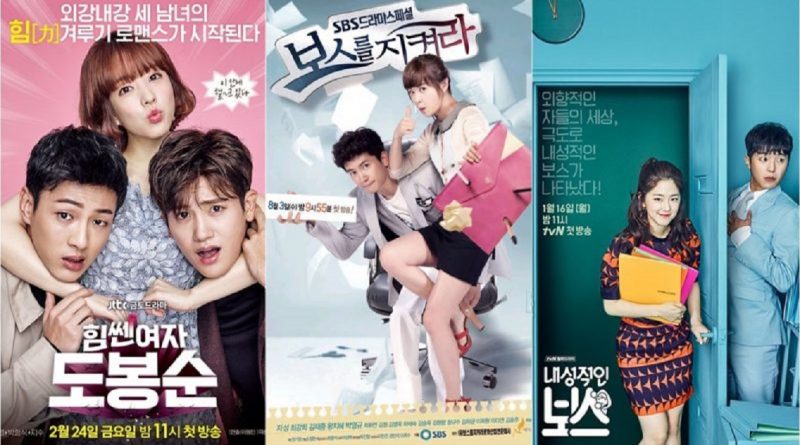 If we have a handsome, kind, and rich boss it’s hard not to fall in love with him. In real life, such a thing may happen but it seems to have more risks. Having to hide your relationship to maintain professionalism in the office is one of them. Fortunately, through Korean dramas, we can have such imagination. What drama has the sweetest boss-employee relationship?

Bong Soon (Park Bo Young) is born with super powers. she dreamed of creating a video game with herself as the main character. Bong Soon’s strength makes it difficult to get a job. One day Ahn Min Hyuk (Park Hyung Sik) the CEO of the game company, sees Bong Soon’s strength and appointing her as a personal bodyguard. Slowly, Min Hyuk is falling for Bong Soon, but as a man, Min Hyuk always tries to protect Bong Soon even though she is stronger.

When Min Hyuk and Bong Soon’s relationship is in trouble, the two often look awkward in the office. That’s what makes them both look adorable.

Eun Sul (Choi Kang Hee) always fails to get a job because she graduated from a less famous university and her CV is less interesting. Until one day she got a call and got a job as secretary of Ji Hoon (Ji Sung). Ji Hoon is such a perfect man. Looked interesting, rich, and worked in his own father’s company.

At first, Ji Hoon and Eun Sul have a bad impression toward each other. So Eun Sul was often getting into trouble and troubled by his superior, that is Ji Hoon. But slowly the chemistry between them starts to build up.

Eun Hwan Ki (Yeon Woo Jin) is the CEO of Public Relation, but his character is very unique. He is shy and introverted. Because of that personality, the employees of his company don’t know him well. Then Chae Ro Woon (Park Hye Soo) starts working at Eun Hwan Ki’s company. Unlike Eun Hwan Ki, Chae Ro Won is an energetic and passionate figure. Initially, she does have her own motive when she’s approaching Eun Hwan Ki. But the longer she stayed by his side, she felt sympathetic and fell for his charm.

It turns out that since the beginning Eun Hwan Ki has been liking Chae Ro Woon. With Eun Hwan Ki’s shy personality, he becomes her secret admirer and sends anonymous flowers when Chae Ro Woon performs a theatrical performance.

September 22, 2017 Ria Comments Off on [RANK AND TALK] 4 Female Characters Who Act As Guys Yet Still Stay Beautiful
DRAMA Rank&Talk

April 21, 2017 Tri Comments Off on Clara Becomes A Model in Fashion Week Tiongkok