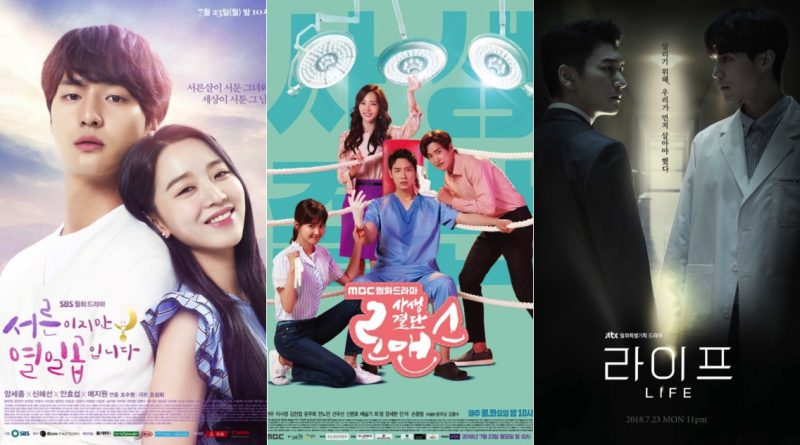 MBC, SBS and JTBC will release their newest dramas in 23rd of July which will competing with each other every Monday and Tuesday. The three dramas are a romantic comedy drama from SBS, a romantic comedy with the set of Hospital from MBC, and the medical drama from JTBC.

MBC will air its newest drama ‘Risky Romance’ in 23rd of July at 10 p.m. this drama will tell a romantic comedy story which took place in hospital.

This drama will unveil a story of a female doctor who is an endocrinologist who is obsessed with hormones and choose a male doctor, a neurologist to win its heart.

SBS will also release its newest drama ‘Thirty but Seventeen’ to replace its currently airing drama ‘Greasy Melo’ at the same time. This drama is a comical drama that be able to touch the viewers heart through the story of a woman in her 20s who went through coma and woke up with the mental of 17 years old.

Shin Hye Sun and Yang Se Jong will play the role of Woo Seo Ri and Gong Woo Jin. Woo Seo Ri is a woman in her 30s who went through coma and woke up with the mental state of 17 years old girl which is the main comedy point of this drama.

Drama ‘Life’ from JTBC has become the most-anticipated drama this summer and it will air for the first time in the same day at 11 p.m local time. ‘Life’ has been prepared to greet the viewers through its perfect line up of cast including Lee Dong Wook and Jo Seung Woo and this drama is also written by the writer of ‘Secret Forest’. This drama will tell a conflict that happened to those who works in the hospital, some of them trying to keep and protect what they belief and some of them is trying to change it.