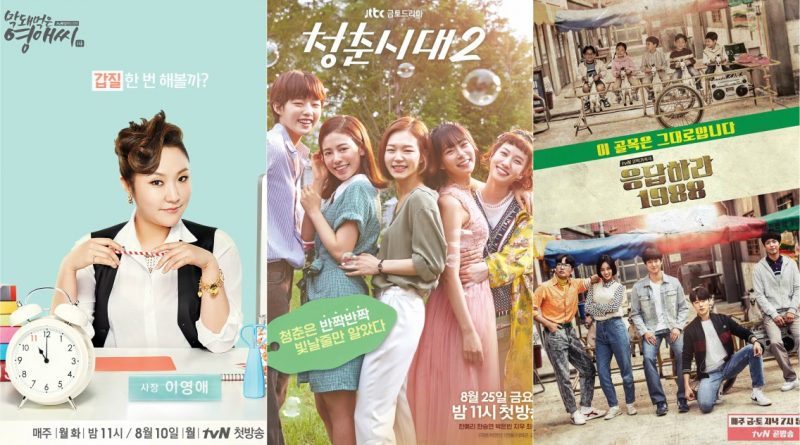 So far the dramas aired on television mostly consist of only one series. Korean drama is divided into two types namely the mini series and family dramaS. Mini drama series usually have episodes of 16 to 20 or more, while family dramas typically reach 50 episodes also can even reach 100 episodes. Even so there are also some mini drama series consisting of several series. Here are 3 dramas that already have more than one series.

The drama ‘Rude Miss Young Ae’ is a drama that aired on tvN. The first series of the drama aired on April 20th through August 3th, 2007 for a total of 16 episodes. This drama tells about the good life romance, work, and daily life of Lee Young Ae played by Kim Hyun Sook and the people around her. Until now the drama ‘Rude Miss Young Ae’ has reached 15 series. The 15th series premiered on October 31st, 2016 to January 3rd, 2017 and consists of 20 episodes. Not until there, the 16th series of the drama has been scheduled to air on December 4th, 2017. ‘Rude Miss Young Ae Season 16’ will replace the drama ‘Because This Is My First Life’ and airs every Monday and Tuesday on tvN at 09.30 pm.

The drama series ‘Reply’ also airs on tvN and directed by director Shin Won Ho. The series begins with the drama ‘Reply 1997’ starring Jung Eun Ji and Seo In Guk and aired from July 24th to September 18th, 2012 for a total of 16 episodes. The next series is ‘Reply 1994’ play by Go Ara and Jung Woo and aired on October 18th through December 28th, 2013 with a total of 21 episodes. Followed by drama ‘Reply 1988’ played by Hyeri, Ryu Joon Yeol, Go Kyung Pyo, Lee Dong Hwi and Park Bo Gum which aired on November 6th, 2015 to January 16th, 2016 with a total of 20 episodes. What is interesting about this series is that even though the female lead actor is changing, her father and mother role remains the same played by Sung Dong Il and Lee Il Hwa.

The drama ‘Age of Youth’ is a drama that aired on JTBC. To date, the drama ‘Age of Youth’ has 2 series. The first series of dramas ran from July 22nd to August 27th, 2016, and the second series aired this year on August 25th and ended on October 7th. This drama tells of the life of 5 girls who live in a boardinghouse. Five people who have different characters live together and become close because of problems experienced by each. In the first series of character Yoo Eun Jae is played by Park Hye Soo, but due to schedule conflict that has Park Hye Soo unable to join in second series so that she is replaced by Ji Woo. In the first series there is also a character Kang Yi Na played by Ryu Hwa Young, but in the second series told that she had left the board and replaced by a new resident named Jo Eun played by Choi A Ra.