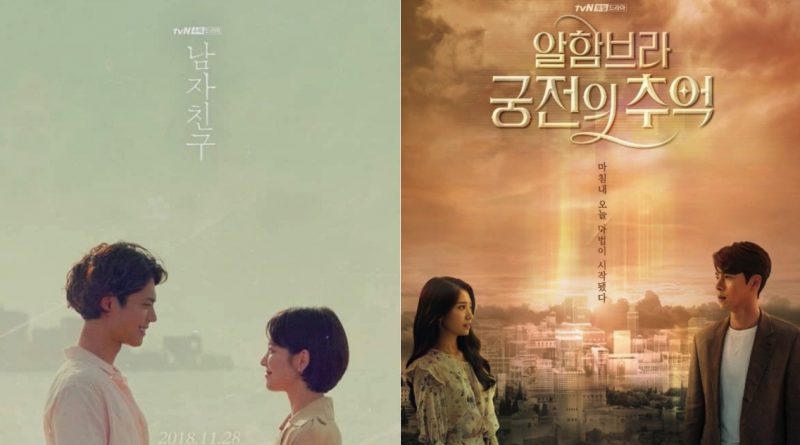 From drama ‘Another Miss Oh’, ‘Prison Playbook’ up to ‘Reply 1988’, tvN keep writing a new history of dramas and it will introduced another two dramas that full with colorful line up for the second half of 2018. The two dramas are none other than ‘Memories of Alhambra’ that is set to air for the first time in 1st of Decembter and drama ‘Boyfriend’ that will air for the first time in late November 2018.

The new tvN drama entitled ‘Memories of Alhambra’ is set to air in December which actor Hyun Bin, Park Shin Hye and even Exo Chanyeol will starred in. The attention is now focusing on the combination of the writer Song Jae Jung who wrote hit dramas such as ‘Nine’, ‘W’, and ‘Queen Inhyun’s Man’ with PD Ahn Gil Ho who is known for his work ‘Secret Forest’. This drama tells a story of a man named Yoo Jin Woo (Hyun Bin), A CEO who will visited Granada, Spain for business trip and ran into the old hostel owner where he lived named jung Hee Joo (Park Shin Hye).

The long awaited and one of the best drama in second half of 2018, ‘Boyfriend’

Drama ‘Boyfriend’ will soon replace drama ‘100 Million Stars Falling from the Sky’ and it has captured the viewers attention through its main line-up such as Park Bo Gum and Song Hye Kyo. Before the drama is officially released, the news about the husband of Song Hye Kyo, Song Joong Ki who starred in drama ‘The Chronicle of Aseudal’ has successfully took the public’s attention. This drama is written by Yoo Young Ah who is known for her work ‘Bel Ami’ and PD Park Shin Woo’ who is known for his work ‘Jealousy Incarnate’. This drama tells a story of chaebol’s wife and rich politician daughter named Cha Soo Hyun (Song Hye Kyo) who never lives her life happily the way she wanted and she will fall in love with an ordinary man who always lives his life happily named Kim Jin Hyuk (Park Bo Gum).

April 5, 2017 Tirta Comments Off on Age is Just a Number for These Celebrity Couples?
DRAMA VIDEO

August 9, 2017 Tirta Comments Off on Kim Nam Gil and Kim Ah Joong are Back with ‘Live Up to Your Name’
VIDEO