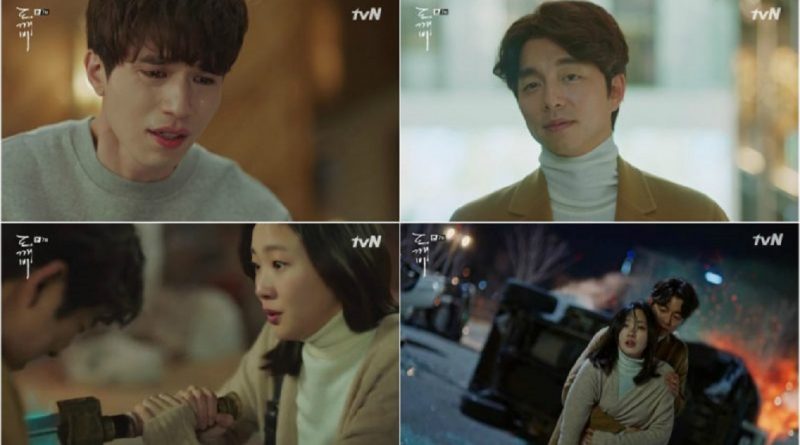 Eun Tak couldn’t hide her happiness when she met Tae Hee, however, Kim Shin turned out observing her from afar.

Meanwhile, the Grim reaper was confused because Sunny called her. Because he didn’t have the courage to pick up the call, he came to see Eun Tak who was with Tae Hee and asked her to answer the call for him.

Eun Tak had no choice, so she answered the call from Sunny and it turned out that Sunny wanted to meet the Grim reaper.

They finally met and Grim Reaper acted awkwardly around her. Their meeting was very short because Grim Reaper told her that he had something else to do.

Several days after, Duk Hwa who was told to bring the painting to Kim Shin came to his house, but he couldn’t find Kim Shin anywhere. There was only Grim Reaper in the house and then they opened the scroll together.

When the grim reaper saw the painting, he shed a tear and looked as if he was in a great pain.

Then a flashback of the King and the Queen of Goryeo was shown.

Meanwhile, Eun Tak and Kim Shin were spending their time together talking about their life then Kim Shin hugged her.

Suddenly, Kim Shin felt a great pain around the part where the word was embedded into him.

Seeing the pained Kim Shin, Eun Tak got confused because she suddenly was able to grab the sword. She then tried to pull the sword from his chest, but Kim Shin pushed her with his great strength.

Kim Shin who realized that Eun Tak was in danger then went to save her which in the end created a road accident.

July 2, 2018 Tri Comments Off on 3 ‘Second Lead’ Couples Who Have A Strong Chemistry
BEAUTY Rank&Talk

May 24, 2017 Tirta Comments Off on Park Seo Joon Returns on the Television Screen with ‘Fight for My Way’
DRAMA VIDEO