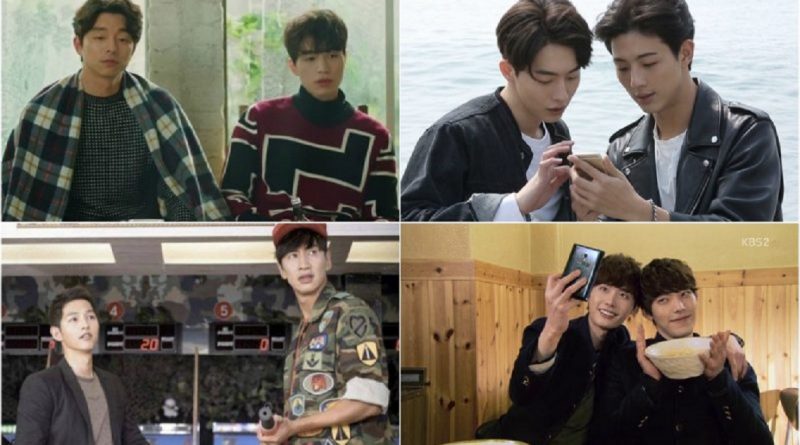 Fans may be aware of their closeness when the tvN’s drama ‘Goblin’ aired in 2016. But actually, Gong Yoo and Lee Dong Wook have been friends for a long time. Even Gong Yoo once said if Lee Dong Wook is the reason that he can survive during his mandatory military service. In addition to meeting at the time of their military service, both also come to the same salon so it is not surprising that they really look like brothers. In March 2017, Gong Yoo showed his support by coming to Lee Dong Wook’s fan meeting show titled ‘2017 Lee Dong Wook Asia Tour in Seoul 4 My Dear’.

Song Joong Ki and Lee Kwang Soo who both were born in 1985 first met on SBS’s ‘Running Man’ variety show in 2010. Since the event, the two became close friends and showed support for each other. In KBS drama ‘Descendants of The Sun’ which aired in 2016, Lee Kwang Soo appeared as a cameo in the first episode. Song Joong Ki also replied his best friend’s kindness by appearing as a cameo in Lee Kwang Soo’s drama ‘Sound of Your Heart’. Earlier in 2012, both had acted together in the drama ‘Innocent Man’ which aired on KBS station. When Song Joong Ki held a fan meeting last year, Lee Kwang Soo was a guest on the show to show his support to his best friend.

April 7, 2017 Tirta Comments Off on An Interview with Hyun Woo, the Icon of ‘Attentive Boyfriend’ in Dramas
MUSIC VIDEO