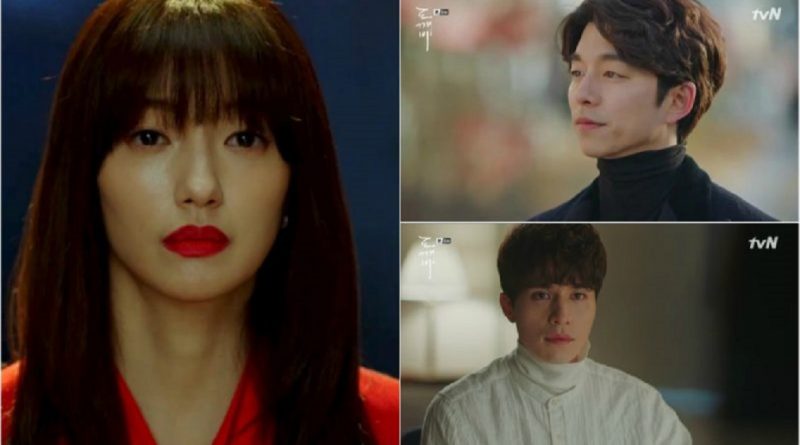 The second half of the episode is started by the scene where Kim Shin accompanied Eun Tak to the bus station.

After Eun Tak got on the bus, Kim Shin met the biker who almost hit him that day. Suddenly, Kim Shin got a vision of the upcoming accident that would involve the bus that Eun Tak was riding on. The biker was the cause of the accident.

Kim Shin then did something to prevent the traffic accident to happen using his special ability.

Meanwhile, across the street, the grim reapers who had received the letters of the death were waiting for the bus. They were surprised that the accident did not occur.

Grim Reaper (Lee Dong Wook) then realized that it was all because of Kim Shin when he saw him standing across the street.

Several days later, the Grim Reaper had another date with Sunny, but the meeting ended abruptly because Grim Reaper suddenly felt a severe pain in his chest that came out of nowhere, which provoked him to hypnotize Sunny and erase all of Sunny’s memory regarding their encounter that night.

In another place, Kim Shin was standing in a bookstore to watch over Eun Tak. Suddenly, the Goddess of Birth came and warned Kim Shin to have his sword pulled out of him immediately. If not, Eun Tak will die. So if Kim Shin’s sword is not being pulled out, Eun Tak will continue to be in constant danger that threatens her life.

At home, Eun Tak was asking Grim Reaper about the consequence of pulling out Kim Shin’s sword from his chest. The Grim Reaper then answered honestly by saying that if the sword is pulled out, Kim Shin’s curse of eternal life ends and he will vanish from the earth. Eun Tak instantly cried upon hearing his answer.

November 27, 2017 Ria Comments Off on Celebrities Winter Fashion at The Premiere of ‘Room No.7’
MUSIC VIDEO

April 13, 2017 Tirta Comments Off on Introducing SEVEN O’CLOCK, a Rookie Group who Wants to be as Big as BIGBANG
MUSIC VIDEO