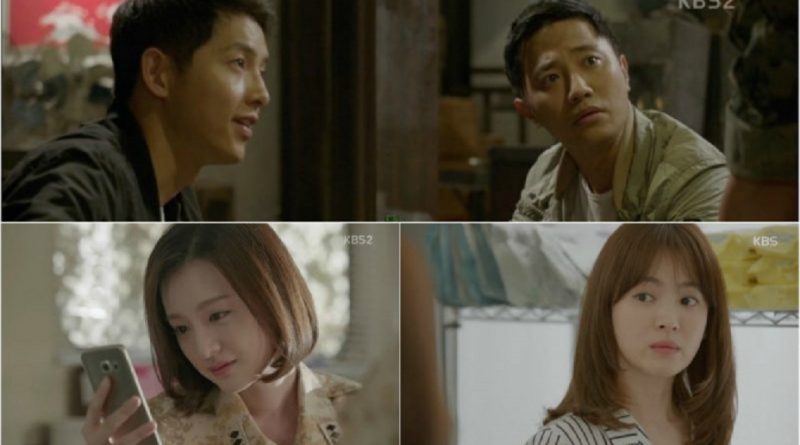 Continuing from the previous episode, in the first half of episode 6, Shi Jin (Song Joong Ki) was back in Korea.

Though it was hard to leave Mo Yeon in Urk when their relationship had just gotten better, Shi Jin still obeyed the order.

After spending his time with Shi Jin, Dae Young got a call from Myeon Joo. However, all he did was listening to Myeon Joo’s words in silence.

The next day was all about Shi Jin and Dae Young’s hilarious bromance. When Shi Jin was playing billiard, Dae Young came wearing the exact same t-shirt to what Shi Jin was wearing.

Back in Urk, Myeong Joo got a call from Shi Jin when she was in the medicube with Mo Yeon. The doctor tried to grab the phone out of Myeong Joo’s hands, but she failed.

On the next day, the Haesung team had to go back to Korea as they had finished their volunteer period. However, when Mo Yeon and some of her colleagues were on the plane, a huge earthquake occurred, destroying almost all of the facilities in Urk. Mo Yeon and her team decided to stay in Urk to help treating the victims.