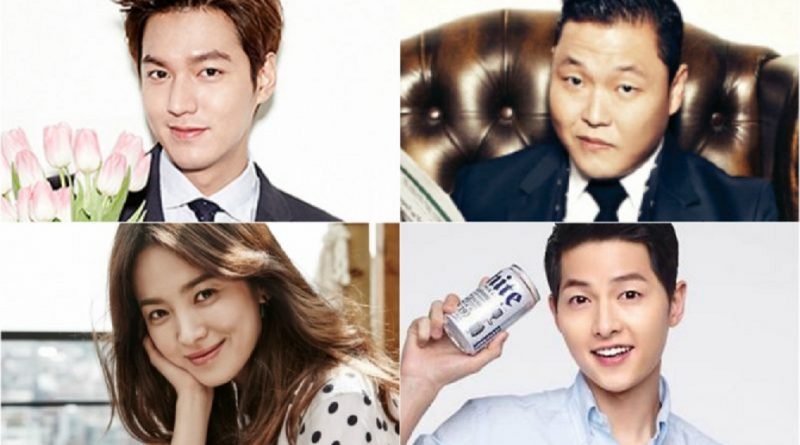 The popularity indicators of Hallyu stars such as Lee Min Ho, Song Joong Ki, Song Hye Kyo, Psy, and others in the continent of America, Europe, Asia and others are being made. Recently the Korean Ministry of Culture, Sports, and Tourism revealed the results of a study of ‘Korean stars Whom People Want to Meet’ that involves 7,200 men and women aged 15 to 59 in the United States, Britain, Japan, China and other countries from October to December 2016.

According to this research in Asia, Lee Min Ho is in the 1st rank and Song Joong Ki is in the second place. Through the drama ‘The Heirs’ and ‘The Legend of the Blue Sea’, Lee Min Ho is continuously displaying his works and building his popularity until he gets the first position in Asia, especially in Indonesia.

Song Joong Ki and Song Hye Kyo are popular through the drama ‘Descendants of the Sun’ and they get a lot of points from China and Taiwan. The drama was aired from February to April last year which also made it to the first position and became a hot topic because of the ‘syndrome’ which it created.

Although Psy’s ‘Gangnam Style’ fever has passed 5 years ago, until now the trend still continues. In 2012, the number of viewers of ‘Gangnam Style’ MV on Youtube scored a fantastic amount until Psy’s name went up on the Billboard charts. This causes the ‘Psy fever’ to continue in the united states (America and Brazil) and Europe (France and England).

September 12, 2017 Ria Comments Off on [RANK AND TALK] 5 Idol Groups That Lost Its Member
Rank&Talk STAR