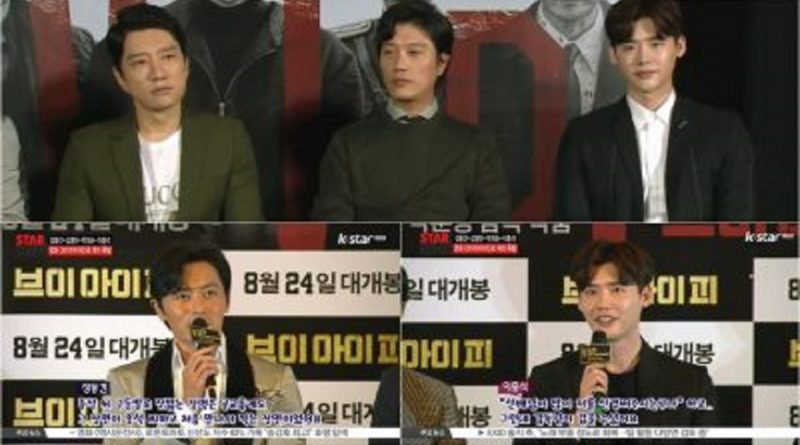 The chemistry of Jang Dong Gun, Kim Myung Min, Park Hee Soon, and Lee Jong Suk in the film ‘VIP’ is seriously intense. Especially the youngest actor within them Lee Jong Suk got a lot of attention from other older actors. Many people expect some ‘bromance’ moments when the actors gather in a work, but the VIP is different compared to others.

According to Jang Dong Gun, Kim Myung Min has a role as the mood maker and therefore he made the atmosphere on the set of fun shooting. Because they are at the same age, since the first meeting he thought the shooting was fun. Then the youngest member Lee Jong Suk is loved by the other actors and this is not just because of his big fandom. “When he was expressing what people used to call a ‘killer smile’, I felt the smile could actually kill someone.”, said Kim Myung Min.

The actors are exposed to Lee Jong Suk fever. Beside that, Jang Dong Gun’s visual also attracts attention. Jang Dong Gun has been the talk because of his statement saying it is difficult to hide a handsome appearance, in a press conference. In the movie, because of his good cursing acting, he is  proud of the well-received image and inviting laughter. Jang Dong Gun said, “Regarding cursing acting, I’m not the one who’s used to saying rude things and people say that I have a good man image. Usually I indeed do not always act as a good person. But such an image is actually not as easy as it looks.”

The movie ‘VIP’ tells the story of four people chasing after one of them who is identified as a serial killer from the north. It will be released on August 24 starring Jang Dong Gun, Kim Myung Min, Park Hee Soon and Lee Jong Suk.

March 2, 2017 Tri Comments Off on Actor Lee Dong Gun and Jo Yoon Hee Are Confirmed to be Dating
MUSIC VIDEO