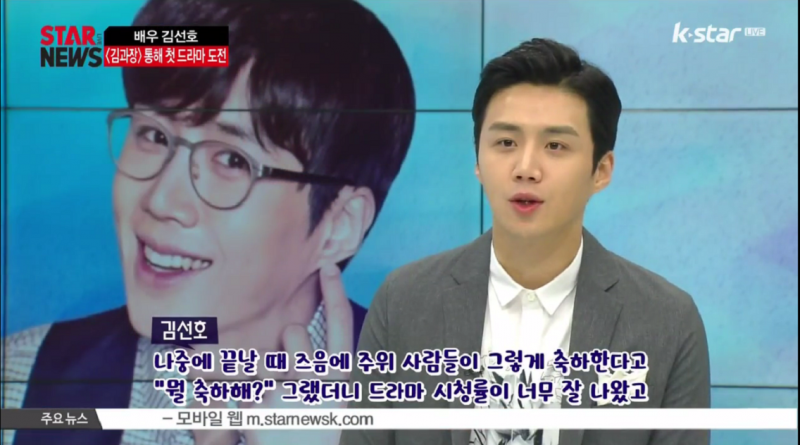 Kim Seon Ho was the actor who played Sun Sang Tae in KBS’ drama ‘Chief Kim’, which was also his debut drama.

For the newbie Kim Seon Ho, ‘Chief Kim’ is a special drama . “When we’ve wrapped up the filming, everyone congratulated me, but I asked them ‘Congratulations for what?’, then I found out that the rating was really good, many people also said that the drama is very interesting, so I think, ‘Wah, I’ve worked with such great people’,” said Seon Ho.

Kim Seon Ho also thanked his co-star, Nam Gung Min, who had helped him by giving a lot of advices. “Between the 7th and 8th episode, Nam Gung Min hyung only slept for 2 or 3 hours in a week. I kept asking him many questions… but he did not show his tired face even once, he always answered my questions patiently. I think it’s the best thing about him, that he could be someone who ‘guides’ me.”

Kim Seon Ho then revealed that he started acting because of his friend. “My friend enrolled himself in an acting school first. When I saw him, I think, ‘Ah, that’s so cool’, then I followed his step. I started acting then… but when we’ve registered ourselves and all, my name got in first than my friend’s name.”

In the future, Kim Seon Ho wants to portray a much more challenging character. “Next time, I want to try a romantic-comedy drama,”

Please anticipate Kim Seon Ho’s performance in his next projects!

November 18, 2017 Ria Comments Off on Hyun Bin and Yoo Ji Tae’s Chemistry in ‘The Swindlers’