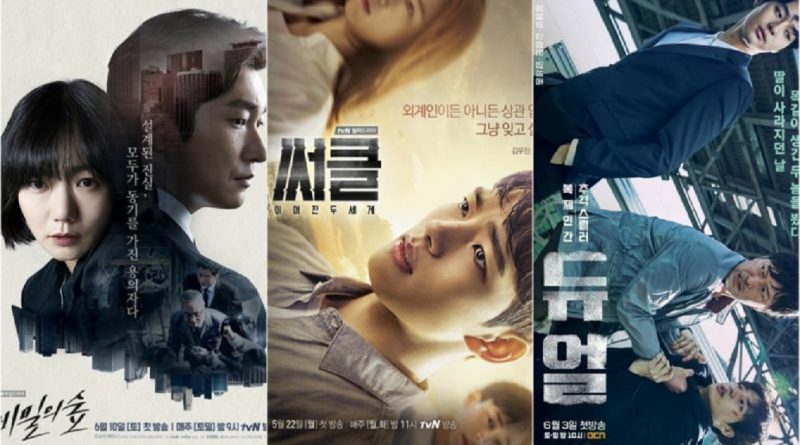 TvN ‘Secret Forest’ and ‘Circle’, to OCN ‘Duel’. Three high-quality dramas are announced. The material and genres that have relied on the time thriller have been extended to the case of SF, clone, and so on.

A well-made drama that gets a good response, ‘Secret Forest’ tells the story of Hwang Si Mok (Jo Seung Woo) who is a secret trailer exploring the truth behind the murder case of legal counsel and the truth behind it, along with a warm detective namedHan Yeo Jin (Bae Doo Na). The first episode will be aired on June 10 (Saturday) at 9pm.

‘Circle’, first broadcasted on May 22, is based on two Korean eras in 2017 and 2037. Two men pursue the mystery in the background of ‘Part 1: Beta Project’ and the future of emotionally controlled society in ‘Part 2: The World Stunning new’ chasing the unknown mysterious cases by 2017. This is not a time slip, but a story from two different eras. In addition, it draws the attention as ‘Korean type of SF’ and brings the audience’s sympathy with the novel material and Korean background of a near future. It airs every Monday and Tuesday evening at 23:50.

Saturday drama OCN ‘Duel’ is a thriller drama depicting the story of a detective kidnapped by two clones and their daughter is divided into good and evil. The drama stands as its own genre, which involves a lot of chasing and it is not a SF drama. The background is not the future, but this is a strange question with the present. The first broadcast is scheduled on Saturday, June 3, at 10 pm.