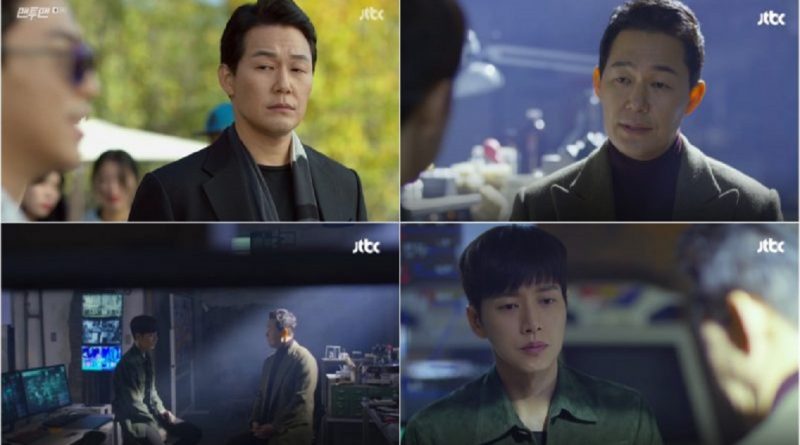 In the 12th episode of JTBC drama ‘Man to Man’ which was aired on the 27th, Seol Woo (Park Hae Jin) is alive despite being shot by team leader Jang. He then quit all of his missions.

Seol Woo is supported by Woong Kwang on both operations. Even when Do Ha is kidnapped by Seo Ki Cheol, Woong Kwang does not send Seol Woo alone, but fights together with him to save Do Ha. Though he is a Korean star, Woon Kwang fights against his enemies regardless of the wound on his face.

Not only that, when Seol Woo needs 5 million to do the operation to get the second wood carving, and asked Woon Kwang to lend him the money, Woon Kwang did not refuse and lend him 5 million won. Thanks to Woon Kwang, Seol Woo could find the key for the second engraving.

Woon Kwang is initially described as a Korean star with bad personality, but gradually becomes a positive character as the time passes. He also has loved Do Ha for a long time, and he takes care of Do Ha as if Do Ha is his own sister.

And in the 12th episode, Woon Kwang’s charisma exploded.

Seol Woo is disappointed with team leader Jang’s dismissal. Woon Kwang tells Seol Woo that he wants to lead a normal life, and tells Do Ha that he will do his best to finish the operation with Seol Woo. Then he goes to Seol Woo and says, he does not care about his 5 million bucks. “Stay with me. Like family. As a brother. ”

Seol Woo says, “Do not you not know who I am? In the present time. In the past too,” but Woon Kwang replied, “I know. You are a lonely person, so let ‘s live together. Do not hurt Do Ha, do not get hurt either because we’re brothers. Think carefully and do what I say. ”

Woon Kwang seems like an impatient guy, but he actually thinks about Seol Woo more than anyone else.