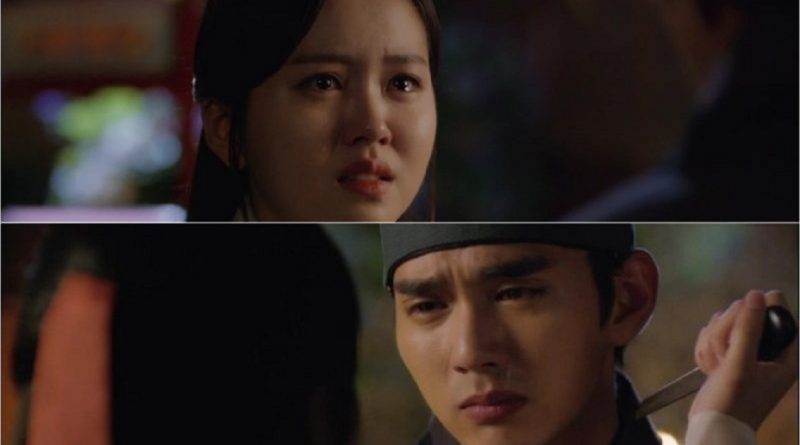 MBC’s ‘Ruler: Master of the Mask’ which was aired on the 22nd showed that Ga Eun (Kim So Hyun) knows the true identity of the crown prince (Yoo Seung Ho), she feels cheated and starts to weep.

Lee Seon (L) the doll king expresses his identity to Ga Eun and informs him that the Bobosang Leader is the real crown prince. Ga Eun is shocked to learn that the crown prince, the one she loves is also the cause of her father’s death. Ga Eun goes to the palace and asks directly about the truth of the matter.

However, Ga Eun loses control and is angry. She said “How can I forgive you. You have killed my father and lied to me”, she blamed herself for saving the life of the crown prince without knowing the truth.

“I will kill you with my hands and avenge my father”, said Ga Eun tried to stab the crown prince with the sword but eventually she gave up. “I let you live not because I forgive you. I do not want my father’s death to save you in vain”, Ga Eun said.

“Go. Don’t appear in front of me. Get lost”, said Ga Eun angrily. There was nothing the crown prince could do but leave the place with tears. Ga Eun burst into tears, feeling frustrated by the real identity of the crown prince. The crown prince Yoo Seung Ho who cries for the guilt and love he feels for Kim So Hyun has thrilled the viewers with an incredible crying scene.

Daemok (Heo Joon Ho) kidnaps Ga Eun and in order to save her, the crown prince comes to Daemok’s headquarter. The love story of the crown prince and Ga Eun, whether the two can survive in the midst of crisis and continue the deep feeling are awaited by the viewers.