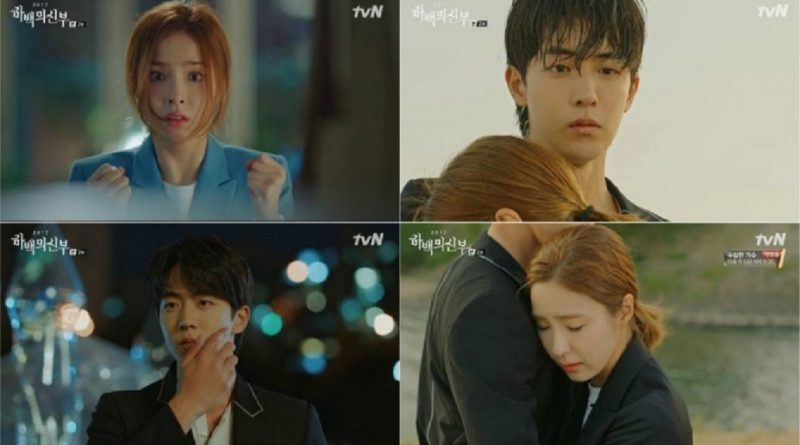 tvN’s ‘Bride of the Water God’ drama shows the hugging and kissing scenes between Nam Joo Hyuk and Shin Se Kyung. It is the early signs of their love story.

On the 2nd episode aired on July 4th, Ha Baek (Nam Joo Hyuk) is shocked to learn that So A (Shin Se Kyung) is a human and shows a kissing scene. Looks like So A falls into Ha Baek’s charm.

Ha Baek said confidently, “It feels like someone is hitting my chest and head”. So A continues to feel that Ha Baek is delusional because he always thinks that he is a god, but he kisses her.

Ha Baek lives on the banks of the Han River. Ha Baek is tired of hearing Nam Soo Ri continuing to complain of hunger. However, Ha Baek is also feeling hungry just like a human.

While going to the psychiatric clinic, So A is reminded of Ha Baek. However, they are a human and a god, they fight each other about how to save the world and destroy it, and suddenly Ma Bong Yeol tries to jump into Han River in front of So A.

Seeing Ma Bong Yeol jumping into the water, So A suddenly fell to the ground.

At that time, Ha Baek who was starving was concentrating on his fried chicken. “The water is dirty and I will not jump there” So A cried uneasily and wanted to jump into the water. Later, Ha Baek coolly saves Ma Bong Yeo.

So A is happy because Ma Bong Yeol survived. On the other hand, Ha Baek is sad because he cannot eat chicken legs given by So A. So A thanked Ha Baek while shedding her tears. Ha Baek feels a weird feeling in him.

The relationship between gods and servants, Ha Baek and So A, the love among them has grown. God Ha Baek started his first love with So A.

July 7, 2018 Ria Comments Off on 4 Places to Visit While In Seoul
DRAMA Rank&Talk