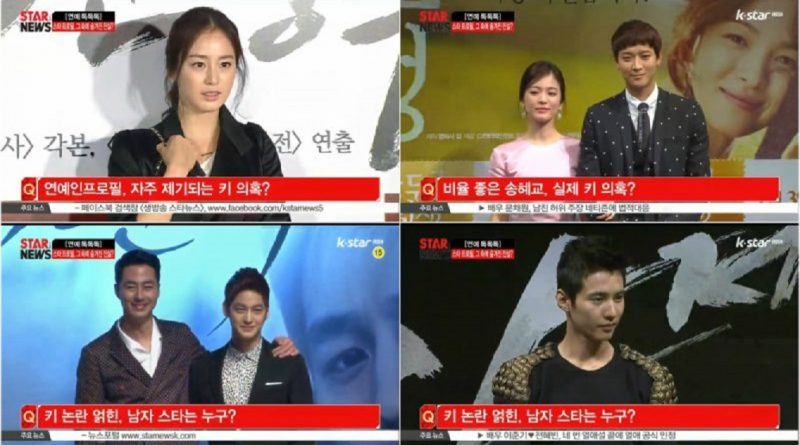 The stars have a perfect profile. People in general often add a bit of their height information, the stars are also doing it. When talking about profile, it seems height is the most important point.

CN Blue’s vocalist Jung Yong Hwa also surprised the public when he was standing next to Lee Hwi Jae. Both of their height is 180cm according to their profile. However, Jung Yong Hwa looked shorter than Lee Hwi Jae.

Kim Bum and Jo In Sung who appeared together in ‘That Winter, The Wind Blows’ make the audience curious about their profile. Jo In Sung’s height is 187cm and Kim Bum 181cm. However, their height difference is too big which makes the public suspicious.

Moreover, Jang Geun Suk’s height is 182cm on his profile and it becomes problematic because he doesn’t look that tall. Not only that, Won Bin, Yoon Sang Hyun, and the other male stars also surprised the audience with their profile.

The stars outside the nation are also the same. Tom Cruise and Brad Pitt might be the example. When Tom Cruise debuted, he revealed his height is 174cm. In fact, his real height is 172cm. People are doubting Brad Pitt’s profile because it is stated that his height is 180cm. People who have met him said he seemed to height 170cm.

Other than height, the other suspicious thing about the celebrities is their age. In 2015 through an interview, Clara revealed her thoughts on her 30s. However, Clara was 31 years old that time. Moreover, if we take a look at Clara’s debut profile, it is stated that she was born in 1984 when in fact she was born in 1982.

The information on their profile is crucial for the stars, that’s why they modified it a bit to make it more memorable.