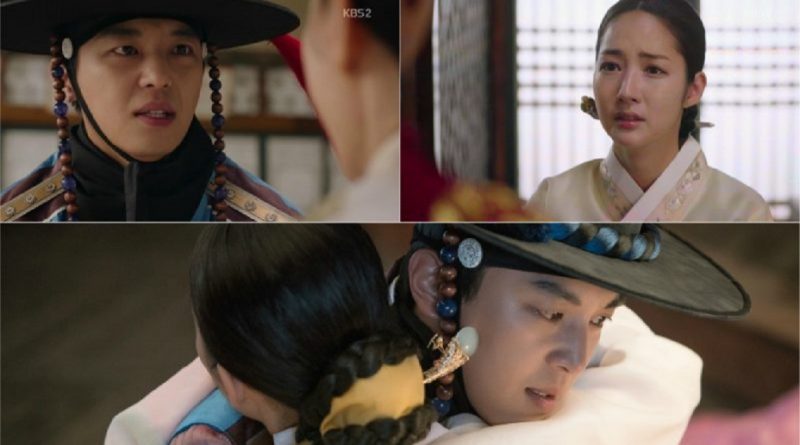 In the 17th episode of KBS’ Wednesday-Thursday drama ‘Seven Days Queen’, Lee Yeok (Yeon Woo Jin) managed to sneak up to the room where Shin Chae Kyung (Park Min Young) was held hostage in the palace.

In last week’s episode, Yeok fell into the King’s trap and was imprisoned for treason. The King ordered for him to be executed, but Shin Chae Kyung asked the King to spare Yeok’s life. In exchange, Chae Kyung offered to live beside the King as his hostage for life. The King then decided to change the punishment. Yeok would not be executed, but his tendon would be cut. Fortunately, the Queen Dowager’s person paid the executor in time so he did not really cut Yeok’s tendon.

Every day in the palace, Chae Kyung waited for Yeok, who took the time to heal himself and prepare his army. Yeok was now determined to revolt against the King, but he warned his people to be careful, as his wife and his mother were still in the Palace. Yeok’s supporter gathered at night and mobilized themselves in silence.

After managing to enter the palace with the help of a minister who supported him, Yeok entered his mother’s room. After that, he came to Chae Kyung’s room. Chae Kyung, who did not know that it was Yeok, had gotten out her knife from under her pillow to protect herself. Then suddenly, Yeok opened his mask and said, “Chae Kyung, it’s me. Have you been waiting for a long time?”

Shin Chae Kyung instantly cried in relief when she saw Yeok’s face. Yeok sat beside her and held her hands. “Have you forgotten my touch?” Chae Kyung, who was still speechless to see her husband alive and well, touched Yeok’s face with her hands. Their faces were filled with love and longing after being separated for a long time.

This is matter of life and death. If the King knew that Yeok had entered the palace and met Chae Kyung, the King will surely punish them two. What will happen next?