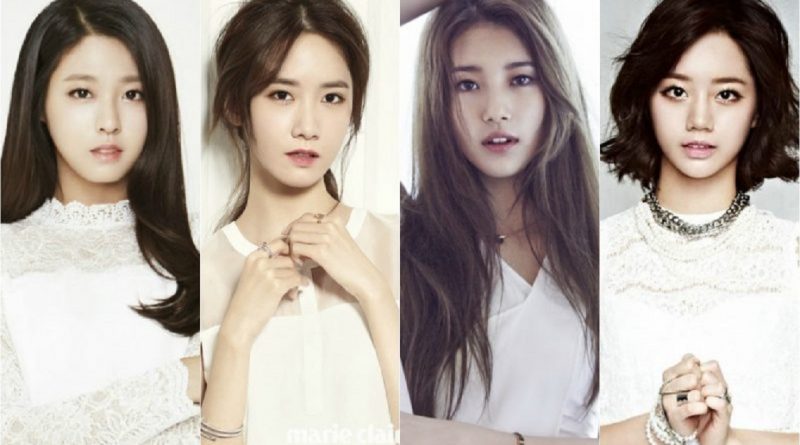 Lately, the idols in South Korea have flown their wings not only in the music industry but also in acting and modeling. As a model for an advertisement, they are expected to market the product well with the help of their fascinating popularity and visuals. People will often see their photos and video in various advertising media. Some of the Korean idols have often appeared in the media and are crowned as advertising queen or CF Queen. Here are 4 Korean Idols said to be the CF Queen:

Suzy’s face has often appeared on the screen, banners and other advertising spots in Korea. She is nicknamed ‘Nation’s First Love’ thanks to her natural and innocent image. She also becomes one of the most popular endorsers in South Korea, and is hailed as “CF Queen” who modeled for some products from cosmetics, clothing, food, and beverages, to cameras. Suzy earned more than 10 billion won in 2013 with more than 14 cooperation deals in a year. CF Suzy wages reach 500 million won per shoot. Some brands that use Suzy as their ambassador are Canon camera, Dominos pizza, Vita500, Smart school uniform, Sumi chips, Bean Pole outdoor, TN, Sudden Attack, Denmark Drinking Yogurt, Carribean Bay, Loen, Nintendo Super Mario Brothers, Lolita Tempika, Post Office insurance and Reebok.

Yoona is a member of SNSD with the highest number of shoot ads more than Tiffany, Soo Young, and other members. Prior to debuting with SNSD, Yoona was known in the entertainment industry as she began to film commercials and models for various magazines while she was a trainee with SM Entertainment. The brands that make Yoona as the model are: G-Star Raw Japan, Innisfree, Eider, Illuminate, LG 3D TV, Lotte Department Store, J. Estina, Casio Baby-G, Romanson, Ace Bed, Gupne Chicken, Girl , Look, Clean and Clear, YeJiMin Pad, S-Oil, Ciba-Vision’s DAILIES & FreshLook Contact Lenses.

Hyeri has taken the CF deal since her aegyo video “Real Man” became viral in 2014. Since then, she has been the face of many products, including 7-Eleven and residential applications “Dabang,” making it virtually impossible to go anywhere in Seoul without seeing her face. In March 2015, she collected a total of 10 solo CF transactions, earning approximately $ 1.8 million. Then in early 2016, she has shot more than 30 ads for brands like Puma, Ghana Lotte Confectionery, Bohae, Bath Happy Amore Pacific. In July 2017, she received the “Female Commercial Film Star Award” at the MTN Broadcast Advertising Awards Festival.

Seolhyun brings a sexy image. She began to be known thanks to her acting skills in KBS2 ‘Orange Marmalade’. Since then, she has modeled many products ranging from fashion models to Mall 6, SK Telecom, Hazzys Accessories, G-Market shopping sites, and China Mind Bridge fashion brand. In addition, Seolhyun and Lee Min-ho were selected as promotional ambassadors for “Visit Korea Year”. Later in the year, she also became a model for Acuvue’s eye lenses, Kolping sportswear brand, Spao casual wear, and Sprite. In addition, she was elected an official ambassador for the 2016 Korean general election.

February 24, 2018 Ria Comments Off on 5 Korean Celebrities Who Had The Chance To Be Athletes
Rank&Talk TRAVEL