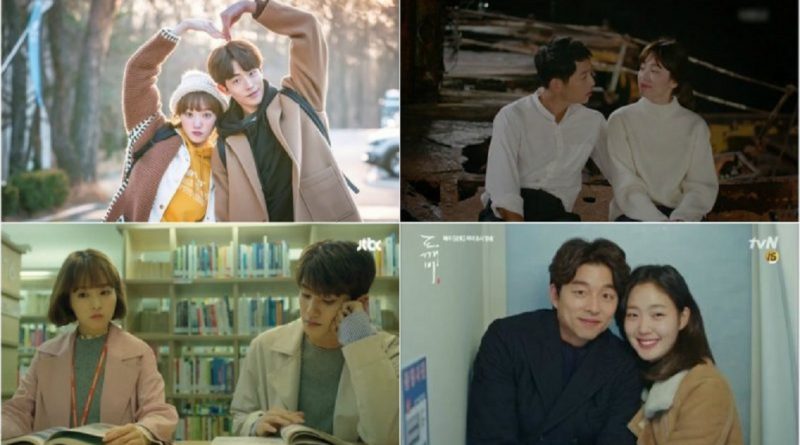 Chemistry between players in a drama is one important element. Actors and actresses will always try hard to create a good chemistry between them. Let’s look at 5 couples with the best chemistry in recent Korean dramas according to CastKo team!

Gong Hyo Jin and Jo In Sung in ‘It’s Okay That’s Love’ made it to our second place. Gong Hyo Jin and Jo In Sung are considered successful in creating a love story that begins with mutual hatred. They are considered too natural and vibrant, just like a couple who really fall in love when they’re portraying their roles, Ji Hae Soo and Jang Jae Yeol. It was very obvious from the way they stare and tease each other. When ‘It’s Okay That’s Love’ had just finished, Jo In Sung was reported to have broken up from his girlfriend. Many people believed that Gong Hyo Jin was the cause of the breakup.

Kim Go Eun and Gong Yoo successfully present a love story between a high school girl and an ahjussi in ‘Goblin’. Their best chemistry could be seen when tragedies come to Ji Eun Tak’s life (Kim Go Eun). Of course, you must still remember the scene where Ji Eun Tak (Kim Go Eun) cried noisily when Kim Shin (Gong Yoo) said goodbye. Just like what happened to our previous couple, not long after ‘Goblin’ ended, Kim Go Eun broke up with her boyfriend, which made fans think that Gong Yoo was the cause behind it.

It’s no secret that ‘SWAG Couple’ is one of the many drama couples with the best chemistry. Lee Sung Kyung and Nam Joo Hyuk are united in ‘The Weightlifting Fairy Kim Bok Joo’. Both of them started off as close friends who had known each other for a long time, as they were both models. Thus, it wasn’t hard for them to build a starking chemistry. Few months ago, the couple admitted that they have been dating since shooting the drama, no wonder they could create such a convincing portrayal of a high school couple in the drama.

Park Bo Young and Park Hyung Sik from the drama ‘Strong Woman Do Bong Soon’ were often referred as ‘Puppy Couple’. Because of how excellently they suit each other, even the production staffs of the drama thought they were secretly dating. However, both of them denied the rumor. The chemistry between the two was very visible, especially when Bong Soon was having a tough time due to her superpower.

Which couple is your favorite among these five?

April 27, 2017 Tirta Comments Off on The Rise of ‘One Agency’ and ‘One Project’ Celebrity Couples
MOVIE VIDEO