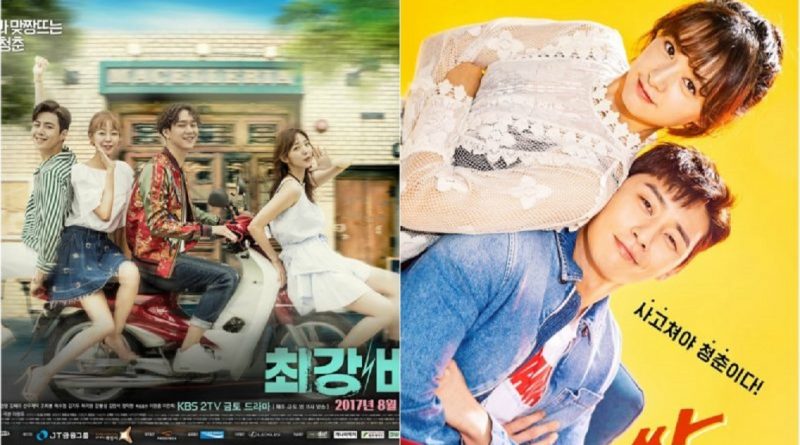 In this case, the work reminds us of the recently-popular KBS2 Monday-Tuesday drama, ‘Fight for My Way’. ‘Fight for My Way’ is a drama about the growing youth who want to go to ‘My Way’, even in the fact that they have to live a bit hard because of their lack of skills. The work drew a great attention through the dreams and enthusiasm of Park Seo Joon and Kim Ji Won, and the real love story between Ahn Jae Hong and Song Ha Yoon.

Thus, ‘Fight for My Way’ and ‘Strongest Deliveryman’ are romantic comedy dramas that omit the story of Cinderella, which is the romance of second generation chaebol and an ordinary boxer. It has a similarity in the growing romantic comedy story, showing the daily lives of the boxer that may happen in the real world.

Then in ‘Strongest Deliveryman’ is also similar to the fact that ‘Fight for My Way’ is chosen from the rising stars with good acting like Park Seo Joon, Kim Ji Won, Ahn Jae Hong and Song Ha Yoon.

‘Strongest Deliveryman’ chose four men and women, including Ko Kyung Pyo, Chae Soo Bin, Kim Seon Ho, Ko Won Hee, and other actors. Ko Kyung Pyo, who proved the role of ‘romantic comedy male’ through SBS ‘Jealousy Incarnate’ and shows a great show on tvN ‘Chicago Typewriter’, this time will play as Choi Kang Soo. Chae Soo Bin, who has been loved for her character, in order to escape the reality, she experiences this nonsense by being a delivery woman.

It should be noted whether the ‘Strongest Deliveryman’ who issued a fresh actor and a delivery man could follow ‘Fight for My Way’ which rewrote the young boxers’ lineage.

‘Strongest Deliveryman’ will continue ‘The Best Hit’ and premiere on August 4th at 11 pm.