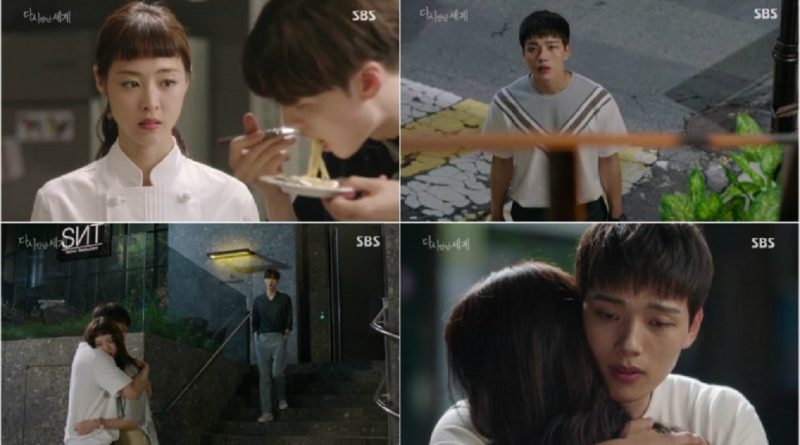 The hardest person to forget is the person whom we could lean on whenever we’re down. That’s exactly what the relationship between Sung Hae Sung and Jung Jung Won was like.

In the latest episode of ‘Reunited World’, Jung Won admitted that she wanted to be a chef because of Hae Sung.

“You’ve left me. ‘What will I do if Hae Sung is still around?’ I thought. That’s why I went to cooking school that day and work here afterward. It would be better to be scolded in the kitchen. Because Hae Sung can not realize his dream, then I will be the one to achieve his dream.”

Cha Min Joon (Ahn Jae Hyeon) wanted to upgrade Jung Won’s position as a cook in the restaurant. Until late at night, Jung Jung Won did not come home in order to practice cooking, so Hae Sung went to pick her up. Cha Min Joon looked jealous when he saw Jung Won and Hae Sung came out of the restaurant together.

Cha Min Joon offered them a ride, but Sung Hae Sung said, “No thanks” with a mean smile. Jung Won asked why Hae Sung did that, but Sung Hae Sung instead asked her back, “Why are you working alone until late at night?” Nevertheless, he drove Jung Jung Won to the front of her house.

Although they often disagreed with each other, they still needed each other. In this episode, Hae Sung met his younger brother, Young Joon (Yoon Sun Woo), but Young Joon does not recognize his brother. Feeling down, Hae Sung sent a message to Jung Won. “I want to meet you.”

That day, Jung Won was finally upgraded as a cook. She prepared a vongole pasta that she had learned the day before, but she failed.

Hae Sung visited Jung Won. Jung Jung Won, who just failed the cooking exam, said “I tried to do it well, but I could not. Forgive me, Hae Sung.” She said while crying on Hae Sung’s shoulder.

Sung Hae Sung said, “From now on, do not try to live for me. Now, live only for yourself, not for me. I will cheer you up,” while giving Jung Won a warm hug.