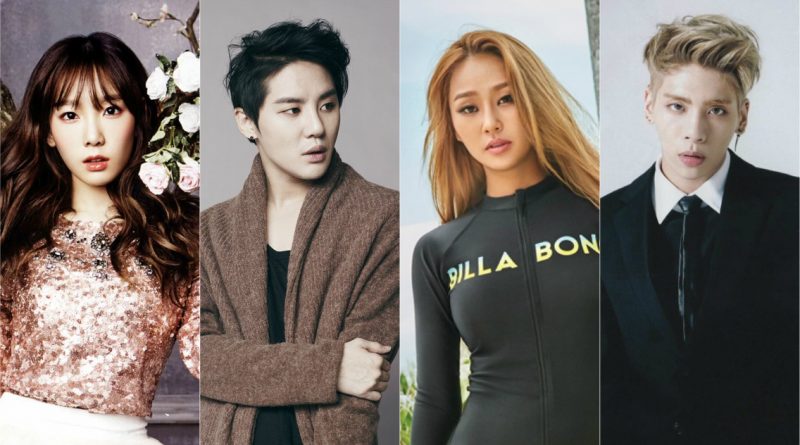 Being part of an idol group does not mean a singer would have an ordinary or below average vocal ablities. In every idol group there is at least one person who has excellent vocals that are recognized by people. A few years ago, some music experts held voting and voted for idol group members who are considered to have beautiful voice and exceptional vocal abilities. Here are the idols who occupy the top 4 positions in the voting.

The first idol is Girls’ Generation group leader, Tae Yeon. Tae Yeon’s vocal power is already highly acclaimed by Korean people. The singer born on March 9th, 1989 was a trainee in SM Entertainment’s Starlight Academy before finally debuting as a member of Girls’ Generation in 2007. She started her solo career in 2015 with the album ‘I’. The album has sold over one million digital copies. Tae Yeon’s vocals are not only prominent when she sings Girls’ Generation songs, but she also often sings ballad songs for SM The Ballad project in 2014. Her singing ability has been acknowledged by many producers in South Korea, one of which is Park Jin Young. Park Jin Young once said that he wants to work with Tae Yeon because Tae Yeon has the ability to tell a story through her voice.

Kim Hyo Jung or better known as Hyo Rin is a member of Korean popular group Sistar. She was born on January 11, 1991 and had auditioned in JYP Entertainment twice. She earned first place in the audition of her second experiment. After that she left JYP Entertainment and joined Starship Entertainment. Hyo Rin actively performs her voice not only through Sistar songs but also drama OSTs. Hyo Rin has filled the soundtracks for popular dramas like SBS ‘Master’s Sun’, ‘My Love From Another Star’, KBS drama ‘Uncontrollably Fond’ and so on. Hyo Rin is the first idol to participate in the ‘I Am A Singer’ program along with other senior Korean singers, and she managed to take second place in the show. Hyo Rin’s extraordinary vocal ability often makes her called Korean version’s Beyonce.

Kim Jun Su who has a stage name XIA is a former member of TVXQ and is currently in JYJ with Jae Joong and Yoo Chun. Kim Jun Su made his debut as a member of TVXQ in 2003 after undergoing training for 6 years. After leaving TVXQ, he started his solo career in 2010 with the release of a Japanese album titled ‘Xiah’and was ranked second on the Japanese Oricon charts. His vocal abilities had been praised by Kang Ta in the 2002 Audition Survival event – Heejun vs. Kangta, Battle of The Century ‘. Kang Ta said that Jun Su has a very high potential to become the main vocalist. Kim Jun Su is actively greeting his fans through his solo activities as a singer and musical actor. In addition, he also participated in the drama soundtrack one of them for the drama ‘Scent of A Woman’ with a song titled ‘You Are So Beautiful’. The song managed to occupy the top rank in real-time music charts shortly after its release.

Kim Jong Hyun is a member of SHINee who was born on April 8, 1990. He debuted with SHINee on May 25, 2008 on SBS’s ‘Inkigayo’ show. In 2009, Jong Hyun made his debut as a songwriter by writing a song titled ‘Romeo’ which is featured in SHINee’s fourth Korean single ‘Juliette’. Jong Hyun is SM Entertainment’s first artist to actively participate in songwriting and composing. Kim Da Hee of Korea Times mentioned Jong Hyun’s name as one of the talented songwriters among idols. His vocal abilities in singing ballad songs made him part of SM The Ballad with original members Jay from TRAX, Kyu Hyun Super Junior, and Jino. In 2011, Jong Hyun came out as the winner of the KBS ‘Immortal Songs 2’ program and managed to defeat his senior from the same label Super Junior’s Ye Sung.