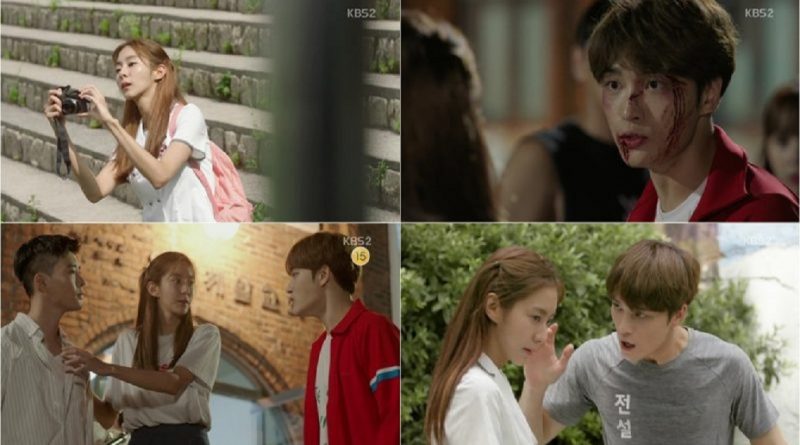 In the drama ‘Manhole’, it is revealed that Uee who liked Kim Jae Joong in the past. On August 10, in KBS ‘Manhole’ Bong Phil (Kim Jae Joong) made a trip to 10 years ago, of course at that time he already likes Soo Jin (Uee).

That day, Bong Phil returns to his past, he tries to tell all of his friends that he is coming from the future, but no one believes him.

Bong Phil knows Soo Jin will break the glass, so he passes to make sure the woman is not hurt. The woman is guilty of breaking the school glass, but she is more worried about Soo Jin getting hurt. Bong Phil lied to the teacher that it was his fault. Finally, Bong Phil was sentenced to run 100 times around the school grounds.

Soo Jin who was liked by Bong Phil was touched when he saw Bong Phil protecting her from her mistake. She took a picture of Bong Phil and smiled. “Suddenly he came and saved me. I must be crazy. I cannot stop smiling”, said Soo Jin showing herself who likes Bong Phil. She sent a message to Bong Phil asking him to eat together, but there was no reply. At that time Bong Phil was drunk and fighting with other people.

Bong Phil challenges a man from the church who invites Soo Jin on a date and he manages to defeat him, but before he can express his feelings to Soo Jin, he travels time again and returns to 2017. He wears a gold-colored outfit, and is shocked when he sees himself having a tattoo. He goes back to the past and back to the future.

Timing is always not right, what changes will occur in the romance of Bong Phil who for 28 years has been crushing on Soo Jin?