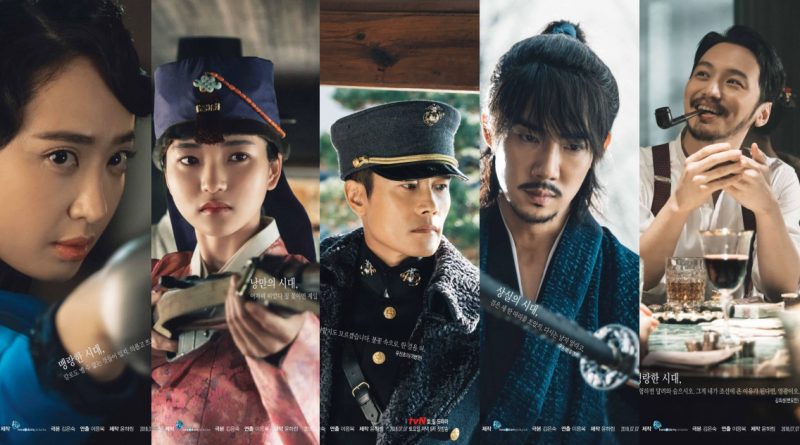 For the first time, the character posters of Lee Byung Hun, Kim Tae Ri, Yoo Yeon Suk, Kim Min Jung and Byung Yo Han from the tvN’s drama ‘Mr.Sunshine’ has been released.

The first inning of ‘Mr.Sunshine’ that is set to air on 7th of July at 9pm in Korea will tell a story of a boy who joined the American military and left Korea through the American war ship after witnessing the death of his mother.

This drama will simply tell a story that has not been recorded in the history and this ‘Mr.Sunshine’ drama is set to air to cherish and honor all the unrecorded and unknown heroes that has been fighting the battle to keep Joseon safe.

Lee Byung Hun who’d moved to Amrica after witnessing the murder of his parents is looking charismatic an full of charm with a sharp look and a gun in his hand pointing at the roof.

Yoo Yeon Suk who was born in Baekjong returned to Joseon as the head of Black Dragon Society in Seoul and showed off his sharp look and eagle eyes with swords on his hand.

Kim Min Jung who was inherited an abundant amount of money and future from her Japanese husband who has passed away will play the role of Kudo Hina, the owner of a hotel with a great fencing skill.

Byun Yo Han will play the role of Korean who has returned from Japan after studying there and he seems to enjoy his pipe cigarette with a smile on his beautifully bearded face.

According to the official production team, “the poster of each character of ‘Mr.Sunshine’ that has been released gives off a hint of a real portrait of Lee Byung Hun, Kim Tae Ri, Yoo Yeon Seok and Kim Min Jung’s life who are trying to survive and save the Joseon from the downfall”.