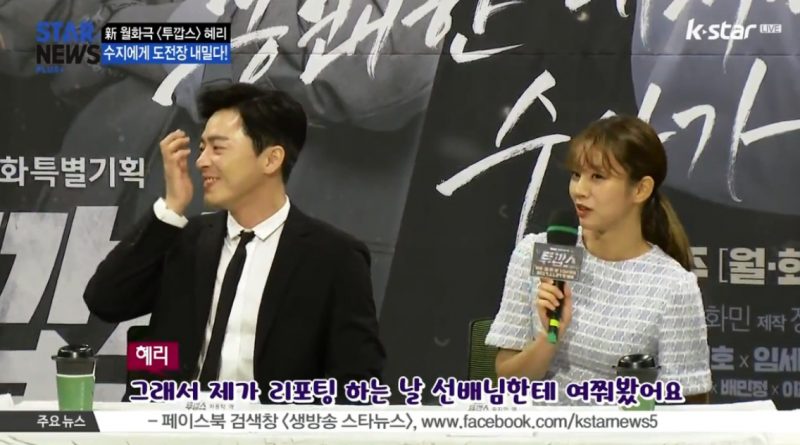 Previously Suzy acted as a reporter in the drama While You Were Sleeping and Hyeri also transformed as a social journalist in Monday-Tuesday’s new MBC drama ‘Two Cops’. Let’s look at Hyeri’s opinion as ‘Reporter Rival’ with Suzy in the drama press conference of ‘Two Cops’. Hyeri seemed to accept the challenge from Suzy.

“When I read the script and got a role as a reporter, I was confused and talked to Suzy, when Suzy’s drama was not yet aired and she said, “Ah I am also a reporter “so I asked Suzy a lot and got a lot of help” said Hyeri.


Not only did Suzy’s friend help her in shaping the character of the reporter. Jo Jung Suk who in the previous drama ‘Jealousy Incarnate’ acted as a reporter also gave advice to Hyeri

That day Jo Jung Suk looked sleep deprived. Apparently he only slept 2 hours after completing filming at 7 am. But he kept answering reporters’ questions patiently. That is the charm of Jo Jung Suk.