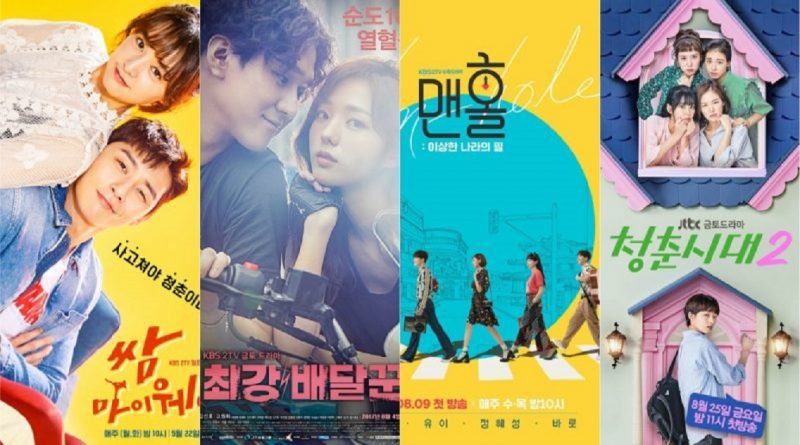 Starting from the drama ‘Fight for My Way’, ‘Manhole’, ‘Strongest Deliveryman’, until ‘Age of Youth 2’, it illustrates that ‘adolescence’ days is a fun time.

In July, the KBS 2TV drama ‘Fight for My Way’ tells the story of a love that grows among teens who want to wade through the ideals of their dreams. It also depicts the youthful spirits in them.

In this drama Ko Dong Man (Park Seo Joon) who dreams to become a taekwondo athlete and Choi Ae Ra (Kim Ji Won) who want to work at a news company, but she becomes a receptionist of a department store, their story led to a lot of sympathy in realizing the dreams that they have.

This drama tells the story of a man who goes into a series of time traveling through a hole in which the male lead, Bong Pil (Kim Jae Joong), has an unrequited love for 28 years with the heroine.

If other works depict a fun teenage story, ‘Strongest Deliveryman’ is a bit different. It tells the bitter story experienced by teenagers. Moreover, the main character Lee Dan A (Chae Soo Bin) struggles to pay her home debt by working hard and gaining money.

Not only KBS, JTBC also follows this trend with the drama ‘Age of Youth 2’ which has achieved success in season 1. In this adolescence-themed trend, it features a youthful appearance and pain felt by teenagers and the drama is filled with a better appearance than the previous work.

August 29, 2017 Tri Comments Off on [RANK AND TALK] 3 Korean Works That Got A Hollywood Adaptation
Rank&Talk STAR