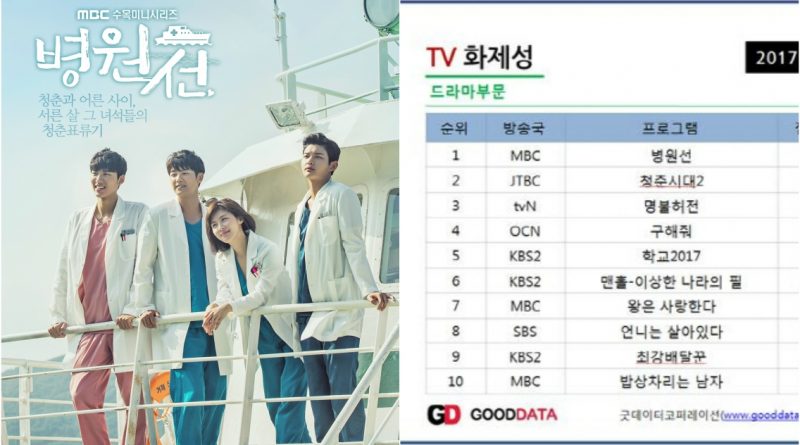 In the TV drama section, MBC ‘Hospital Ship’ placed in the first rank with 11.7% percentage.

Good Data Corporation, which is a TV subject analysis agent, announced on the 4th that ‘Hospital Ship’ is interpreted as a topic in the news section due to the first increase in production and broadcast presentation. In addition, the netizen’s initial reaction was a mixture of positive and negative.

‘Age of Youth 2’, which premiered last week, was pushed to second place, but especially the performances of Han Seung Yeon, Park Eun Bin, and Lee Yoo Jin became a hot topic and high interest of the audience was maintained. In third place, ‘Live Up to Your Name, Dr. Heo ‘, who has improved for the third consecutive week after the broadcast, has increased one step from last week, while ‘ Save Me ‘is in fourth place.

After that, these are the dramas in positions 5 to 9 in sequence ‘School 2017’, ‘Manhole’, ‘The King Loves’,’ Band of Sisters’ and ‘Strongest Deliveryman’, and a new weekend drama ‘Man Who Sets the Table ‘and’ My Golden Life ‘are respectively in the order of 10 and 11.