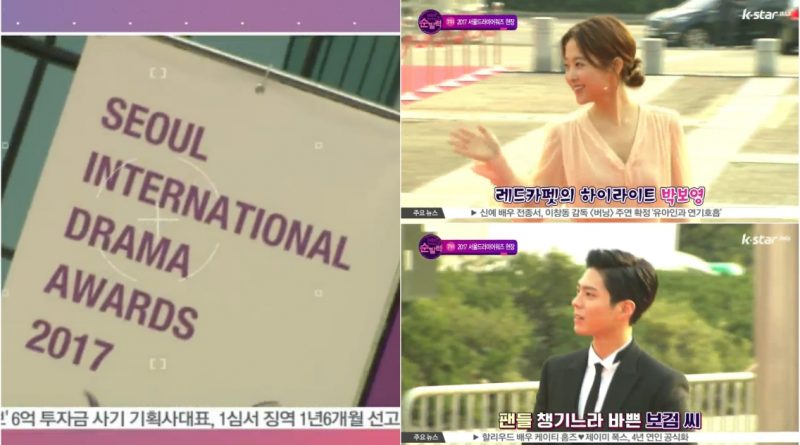 On the 7th, 2017 Seoul Drama Awards red carpet was held. Many artists were present there. The shining stars have captivated many people.

Gong Seung Yeon came by showing her sexy collarbone and wearing a red one piece. Then also seen Lee Ki Woo, who showed her gentle charm in ‘Woman of Dignity’. Wang Bit Na was present on the red carpet with a gold dress flowing along her body.  Unlike in the drama, Im Soo Hyang also focused on her dress with a white dress that revealed her body. She said, “I always wear police uniforms, and I feel I have not dressed like this for a long time”.

Jang Shin Young lighted the red carpet with a white Mermaid dress with colorful embroidery. Meanwhile, Han Eun Jung showed off her sexy body with a translucent two piece dress. Lee El, who chose the blue dress, was hailed as the atmospheric goddess on the red carpet.

The peak of the 2017 Seoul Drama Awards Red Carpet was the moment Park Bo Young showed up in an apricot dress. Recently it was known that she performed ankle surgery, but she shyly posed for fans despite being in recovery. Next, The title of a loving artist cannot be separated from Park Bo Gum. Park Bo Gum, who stepped on the red carpet in a black three-piece suit, was busy showing greetings to his fans. After a short interview, Park Bo Gum could not help but showed his greetings and shook hands with fans. On that day, Park Bo Gum and Park Bo Young won Korean actor and actress award. ‘I am happy to receive the prize after Song Joong Ki, I hope you continue to be happy with Song Hye Kyo’ Park Bo Gum said after being awarded.

The stars who worked hard for audiences at home for the past year! May they continue to show their cool looks and performances!