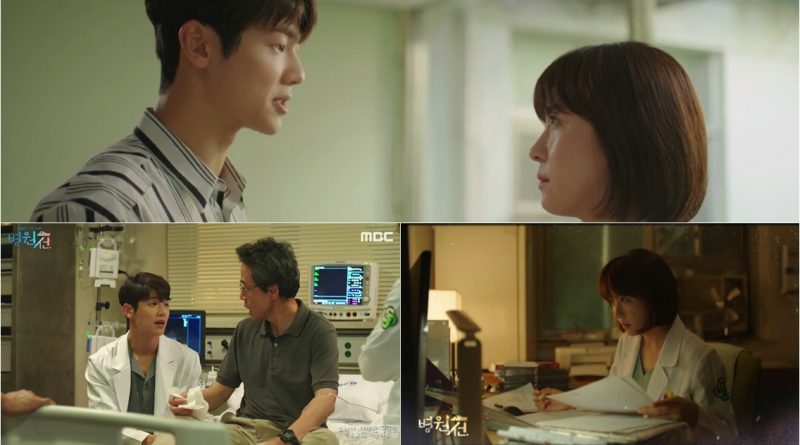 On the 13th, MBC’s Wednesday-Thursday drama ‘Hospital Ship’ episode 9 and 10 depicted a series of incidents occurred on hospital ships that adapted to the island’s lifestyle. Song Eun Jae (Ha Ji Won) claimed that no one has ever performed a precedent operation yet. Kwak Hyun (Kang Min Hyuk) could not believe it because the opinion only thinks of the patient as a case study.

Eun Jae and Hyun’s opinions contradicted to one another. Seol Jae Chan is a professor and father to Hyun who is diagnosed with stage 4 rectal cancer. Regardless of the medical staff’s judgment that said surgical treatment for the disease will be difficult, Eun Jae suggested another way of doing exsitu hepatectomy surgery. However everyone doubted it because in Korea no one has done it yet.

Beside being a doctor, Hyun is also Seol Jae Chan’s guardian who does not have a family, and he was confused about having to trust doctor Eun Jae. Everyone said it was a difficult operation, but he thought  Eun Jae was the only one who made efforts for his patients.

However, the situation then changed. When the exsitu operation was going to take place, his teacher Kim Do Hoon (Min jung) came to Geoje island to prevent Eun Jae. “You just want to fulfill your theses. You can also fail”, said Kim Do Hoon. Eun Jae answered, “Do I have to be afraid?” Hyun who heared Eun Jae’s reply got angry. “You should be afraid. How long do you think the patient is a problem? They are not a case but human. If you fail, the man named Seo Jae Chan will die, he will die”, said Hyun who could not accept that Eun Jae thinks Seol Jae Chan is just a case.

Song Eun Jae who wanted to perform surgery became a cold-hearted doctor who sees patients as a case. On the 14th, the story of her not being able to surrender performing the operation will continue.

December 8, 2017 Ria Comments Off on 3 Webtoon Adaptation Drama Whose Theme Is Not Romance
DRAMA Rank&Talk