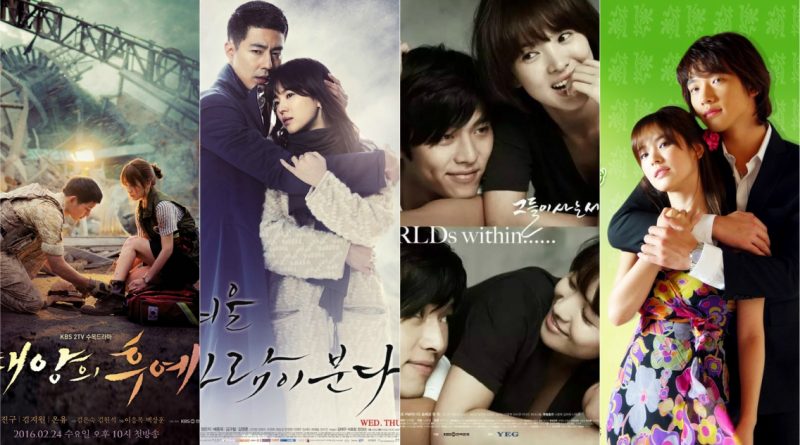 Song Hye Kyo, the fiance of famous Korean actor Song Joong Ki who plans to marry at Shilla Hotel on October 31, 2017. Since debuting, Song Hye Kyo has starred in many dramas. Here are four successful dramas that make Song Hye Kyo’s name known to the public.

Descendants of the Sun

In KBS drama ‘Decendants of the Sun’ by author Kim Eun Sook, Song Hye Kyo plays the role of Kang Mo Yeon, a doctor assigned to the country of Urk. In this drama, Song Hye Kyo co-acted with her future husband Song Joong Ki. They were paired up to be the main character in which Song Joong Ki plays Yoo Shi Jin. Yoo Shi Jin immediately fell in love with Kang Mo Yeon at first sight and their love grew when both were assigned to the Urk state. Their love towards each other in in the drama develops into the real world making all the viewers feel happy.

That Winter, The Wind Blows

Song Hye Kyo co-acted with Jo Iin Sung in the SBS drama ‘That Winter, The Wind Blows’. Jo Il Sung plays the role of Oh Soo as a gambler while Song Hye Kyo plays Oh Young who is a fraud pretending to be someone’s long-lost half-sister. These two find the true meaning of love after meeting each other. The series is based on the Japanese drama I Do not Need Love, Summer (Ai Nante Irane Yo, Natsu) which aired on TBS in 2002.

KBS drama ‘Worlds Within ….’ starring Song Hye Kyo was aired in 2008. Song Hye Kyo co-acted with handsome actor Hyun Bin. Jung Ji Oh (Hyun Bin) and Joo Joon Young (Song Hye Kyo) are two people with very different backgrounds. Joon Young was born in a rich family, while Ji Oh is in a poor peasant family but still loves her mother very much. They are lovers in their college days, but they struggle because of their long distance relationship. Because of these differences many obstacles need to be face for them to unite.

KBS’s drama ‘Full House’ can be called the phenomenal drama starring Song Hye Kyo and Rain. In this drama Song Hye Kyo (Han Ji Eun) performed romantic acting with Rain (Lee Young Jae). The drama is trying to answer the question of whether a famous actor and ordinary woman can learn to love each other in a marriage. Ji Eun is a screenwriter who has the dream of living in a house called “Full House” built by her late father. In the plane she meets a famous actor named Young Jae. Although they are not familiar with each other because of their contrasting habits, they agree to stay with each other. Start from there the comedy-romantic story begins.

May 7, 2017 Tirta Comments Off on An Interview with Kim Seon Ho, the Sun Sang Tae in ‘Chief Kim’